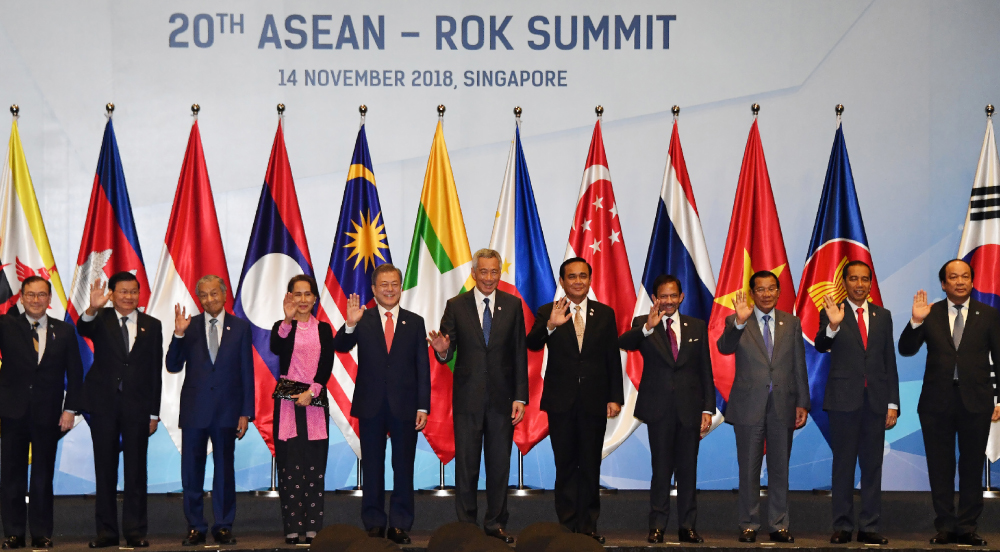 President Joko Widodo of Indonesia suggested Moon invite Kim to the commemorative summit next year during Wednesday’s Korea-Asean summit in Singapore, in which Moon and heads of 10 Asean member states met.

“President Joko Widodo assessed that if North Korean leader Kim would participate in the special summit, it would enhance the significance of the meeting and expressed his hope that such a prospect could be realized,” Kim Eui-kyeom, spokesman for the Blue House, told reporters.

“That is a meaningful suggestion. I will seriously consider [the invitation] amid an atmosphere of pursuing peace on the Korean Peninsula. To that end, I will closely coordinate with Asean member states to realize it,” Moon was quoted as saying.

That new possibility came as questions have grown over whether Kim can make a visit to Seoul by the end of this year as agreed upon during the Pyongyang summit between Moon and Kim Jong-un two months ago.

Next year’s commemorative summit hosted by Korea will be the third of its kind. The first such special summit was held in 2009 on Jeju Island, followed by another in Busan in 2014.

Aside from the third Korea-Asean special summit, Moon will also play host the inaugural Korea-Mekong summit, which will involve Moon and leaders of countries located along the world’s 12th longest river. Laos, Vietnam, Thailand, Myanmar and Cambodia will participate in the inaugural summit next year, likely to be held in Seoul.

On the economic front, Moon said in his opening remarks that he aimed to dramatically increase Korea’s trade with Asean member states by 2020.

“Korea will work more closely with Asean to achieve the goals of increasing bilateral trade to $200 billion,” he said, “and the number of people traveling back and forth to 15 million by 2020.”

Deepening economic ties with Southeast Asia is one of Moon’s signature economic initiatives, which he calls his New Southern Policy, first described by Moon during a visit to Indonesia last November for the 19th Korea-Asean summit. Its aim is to reduce Korea’s economic dependence on the United States and China.

While setting a goal of reaching $200 billion in annual trade in the next three years, Moon pointed out that “trade between Korea and Asean up to September this year increased six percent year on year to reach $120 billion.”

The number of people going back and forth between Korea and the region also increased by 17 percent year on year to surpass eight million, the president said.

“Asean members and Korea have similar historical experiences,” he said. “They [Asean] have prevailed over colonial-era authoritarianism and achieved astounding growth. I feel a special sense of camaraderie.”

On the sidelines of the Korea-Asean summit, Moon had a summit with Brunei’s sultan Hassanal Bolkiah and Prime Minister Thongloun Sisoulith of Laos and discussed ways to bolster economic ties.

Moon also had a summit with Russian President Vladimir Putin with a focus on making progress in North Korean denuclearization. It was the fourth summit between the two and the first since June when the two met in Moscow.

Moon will have a meeting with U.S. Vice President Mike Pence, who is attending the Asean summit in place of U.S. President Donald Trump Thursday morning. Moon will stay in Singapore, the first leg of a six-day overseas trip, until Friday to attend the 21st Asean Plus Three summit (which includes Korea, Japan and China) and the 13th East Asia Summit. He then flies to the island nation of Papua New Guinea to attend the Asia-Pacific Economic Cooperation (APEC) summit on Saturday and Sunday. Moon will have a summit with President Xi Jinping of China on the sidelines of the APEC summit.