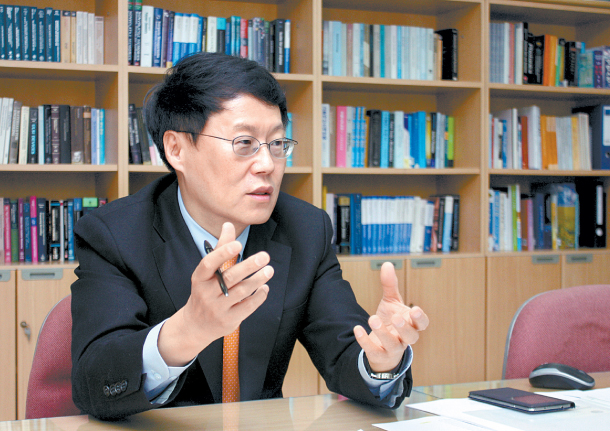 Korean Society of Semiconductor & Display Technology President Park Jea-gun shares his opinions on Japan’s enforced restrictions on core tech materials and the impact it can bring on Korean and Japanese companies. [HANYANG UNIVERSITY]

On Monday, Japan said that it would make sales more difficult to Korea of fluorinated polyimide, used for displays, and hydrogen fluoride - or etching gas - and photoresists, essential for semiconductor production. It may also remove Korea from a list of export partners receiving preferential treatment.

The measures are a response to the Korean court ruling related to wartime forced labor.

President Park Jea-gun of the Korean Society of Semiconductor & Display Technology thinks that Korean companies will be able to survive for up to four months without Japanese materials - three months working through their component supplies and one month selling off existing stock.

“Even if Japan cuts component supply immediately, Korea’s semiconductor [industry] will be able to keep afloat for four months. But if the situation goes on longer than that, both Korean and Japanese companies will see irreversible damage,” he said.

Also a professor at Hanyang University for semiconductor engineering, Park is one of the most renowned chip experts in the country.

“If we fire back by cutting OLED display panel exports, Sony will have to close down its high-end TV business,” he added. “Both governments should work to find a resolution before the situation escalates to that stage.”

Below is an edited excerpt of Park’s interview with the JoongAng Ilbo. 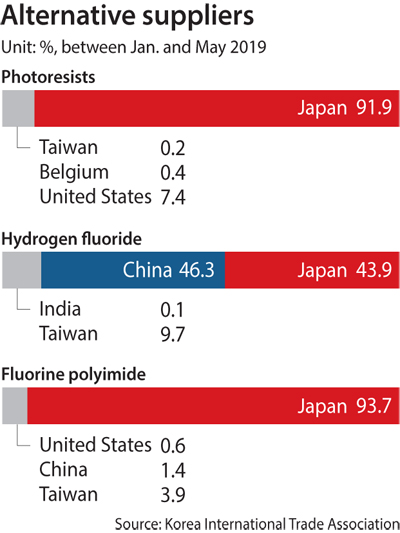 Q. Japan is restricting photoresists, hydrogen fluoride and fluorinated polyimide for smartphones and OLED TVs. Which of them poses the biggest threat to Korean businesses?

A. If I really have to pick one, it’s the photoresists.

Photoresists can be largely categorized into two types: the general one that are used to produce memory chips and the high-end products necessary for making application processors, the brain of smartphones, and high-precision processes like extreme ultraviolet lithography (EUV) technology.

The general one is supplied by Japan’s TOK from a factory in Pyeongtaek, Gyeonggi, to Samsung Electronics and SK Hynix. But even for this general version, TOK needs to have base materials brought in from Japan. Photoresists for AP chips and EUV technology come from Japan’s Shin-Etsu Chemical, JSR and Sumitomo. Apart from them, there’s practically no alternative.

Neither Samsung nor SK seems to have enough stock.

Both Samsung and SK sent employees to Taiwan in order to secure a supply. Both companies have storage space near Stella Chemifa’s Japanese factory so they’ve pushed efforts to secure as much stock as they can until Thursday. With what’s in the storage space in Japan and those pulled from Taiwan, my expectation is that they will have stockpiled three months’ worth of materials.

Both companies are evaluating Chinese products to diversify supply in the long term. But the problem is purity. There was an attempt to build high-purity hydrogen fluoride factories in Korea but it was met with opposition from civic groups after the 2012 hydrofluoric acid leak in Gumi, North Gyeongsang. Looking back, it’s a shame.

How does the lack of Japanese polyimide affect Korea’s smartphones or OLED TVs?

Samsung Electronics exclusively uses Sumitomo’s polyimide for its high-end smartphones. Products from SKC or Kolon Industries are being considered as an alternative but there’s still a quality gap. Sumitomo polyimide is also used for the Galaxy Fold. From Samsung’s perspective, it’s understandable that they want to use the best material possible for the first foldable phone, but at the moment a supply shortage seems inevitable.

Japan says it’s considering widening the scope of export-restricted products. Are there any ways to lower dependence on Japanese material?

The ratio of domestic material used in the chip manufacturing process is around 40 percent. For more expensive and high-end materials, we depend a lot on Japan and the United States. There’s been an increase of local material suppliers but it’s a given fact that there exists a gap in the level of technology. But with this incident I think Samsung and SK will increasingly try to diversify suppliers across Korea and China.

What effects can there be on Japan if restrictions are imposed on display parts?

Japan’s Canon and Nikon are dominant leaders in display exposure tools. Samsung and LG Display produce 30 percent of the global display market. Reversely, if Samsung and LG can’t purchase tools from Canon and Nikon, both companies will be dealt a big blow in sales. It’s not a vertical relationship but more like a cooperative one.

If we push things to the extreme, we, too, can stop supplying OLED panels to Sony, Japan’s electronics giant. In that case, Sony won’t be able to sell high-end TVs due to a shortage of panels. Semiconductors sold to Sony and Sharp can also be stopped. This will inevitably create problems for them in electronics and smartphone production.

How can we overcome this situation?

From Japanese Prime Minister Shinzo Abe’s end, his actions seem to be in consideration of the Japanese House of Councillors election on July 21.

If the current situation continues, Japanese companies will complain to their government. Hydrogen fluoride manufacturers, for example, won’t be able to run their factories. They’ll halt the facilities and costs will shoot up. Who will be responsible for that damage? It’s no different for local companies.

The governments should swiftly find a resolution.