[Sustainable Future] It’s paper not plastic, electric over gasoline, for the Korean retailers

[Sustainable Future] It’s paper not plastic, electric over gasoline, for the Korean retailers

With customers increasingly shopping with an eye toward big social issues, retailers are taking note. Online retailers are especially conscious of how their business affects the environment, as they are seen as prime culprits in the creation of waste.

It has become difficult for all retailers, large and small, to ignore the harm they may be causing.

Traditional retailers, e-commerce operators and food delivery platforms have jumped in to tackle the issue.

The average amount of plastic waste generated annually by three major discount chain marts - Emart, Lotte Mart and Homeplus - is 658 tons, according to the Ministry of Environment in August.

With the government’s goal to reduce plastic waste by 50 percent by 2030 and to pull up its recycling rate from the current 34 percent to 70 percent, it has been strengthening regulations on retailers and their use of disposable materials.

The government in August banned major retailers from offering packaging, such as paper boxes and tape, to encourage consumers to use personal shopping baskets. Paper boxes are recyclable, but tape and string pollute the environment. In April, the environment ministry banned major department stores and discount chain marts from utilizing disposable plastic bags.

The stricter regulations on top of the growing tendency for moral consumption have made it inevitable for smaller retailers to take action. 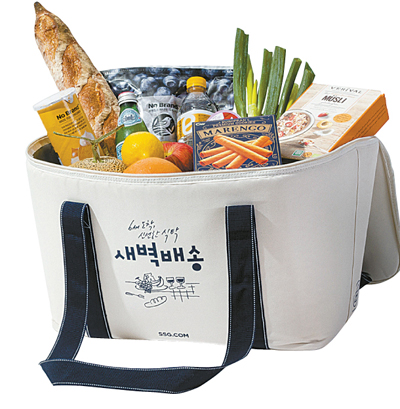 Last month, Market Kurly announced its plans to replace all polystyrene packaging with paper by 2021. Best known for its pioneering dawn delivery service, Market Kurly said its decision was affected by self-reflection and complaints from consumers who have grown more aware about excess packaging.

Market Kurly said it has replaced plastic pouches, tape and zipper bags with paper alternatives. The company collects the paper packaging from consumers and sells it to Tree Planet, a social venture. The profit earned from selling packaging is spent to plant trees at elementary schools, according to the company.

Earlier this month, Hello Nature said it will pack all the items ordered by its users in a single box instead of packing produce in separate boxes. A spokesperson from the company said it will make better use of box space to fit everything. The announcement followed the company’s plan announced in April to scrap the use of Styrofoam and vinyl.

Coupang also joined the movement, and said it has reduced packaging waste over the past year by 60 percent. It replaced Styrofoam boxes used to deliver fresh produce with paper boxes with a special, insulating liner. The company said it also started delivering ready-wrapped items, like toilet paper or diapers, without additional packaging.

Traditional retailers like Shinsegae have started taking the environment more seriously with the expansion of online services. SSG.com, its online shopping brand, in April introduced a reusable cooler bag for the early-morning delivery service.

In addition to introducing the reusable cooler bag, SSG.com went a step further to deliver packages in electric refrigerated trucks.

The company announced earlier this month that it signed an agreement with Hyundai Glovis to deliver its fresh produce in electric refrigerated vehicles by early next year.

With food delivery seen as a major contributor to pollution, some franchise food restaurants have started delivering by electric scooters.

In January, McDonald’s Korea announced it will replace 1,400 delivery motorbikes used at the directly-managed stores with electric scooters by 2021. The hamburger franchise said it expects to reduce annual carbon dioxide emissions by 937 tons.

“With their current delivery method of using motorbikes, food delivery companies have become major contributors to air pollution,” said Lee Jeong-hee, economics professor at Chung-Ang University. “The government’s response to handling the air pollution from the exhaust of delivery motorbikes has been quite slow. Food delivery operators have to voluntarily step in to replace the motorbikes with electric scooters.”

Food delivery operators have been trying to switch to eco-friendly food packaging.

Baedal Minjok in April rolled out the World Without Waste project, which aims to cut the amount of disposable packaging used. It added a new feature on its mobile app that enables users to choose whether to receive disposable chopsticks or spoons when receiving the delivery.

The market leader also developed reusable dishes, and is encouraging affiliated restaurant owners to utilize them for packaged food by offering them a temporary discount.

“From the company perspective, becoming eco-friendly entails extra cost, especially if it involves manufacturing processes,” said a spokesperson for Baedal Minjok. “But consumers are demanding change from us. Only time will tell whether meeting the demand would result in higher profit.”

Yogiyo now offers consumers an option on whether or not to receive disposable utensils or side dishes for the food they order. Yogiyo also opened an eco-friendly category on its online mall, where packaging for restaurant owners is sold. The eco-friendly bags sold on the platform can biodegrade in 90 days in a landfill, according to Delivery Hero.

Although becoming environmentally friendly may be driven by good intentions, it also entails cost from the company perspective.

“Adopting eco-friendly packaging could be a burden for the company because it entails cost for research and development and the price of eco-friendly materials is usually more expensive than the materials that have been commonly used, like plastics,” said a spokesperson for BGF Retail. “But we consider the spending as a long-term investment that could help raise brand image.”

A spokesperson from Market Kurly said the company faced a 10 percent increase in packaging cost by switching to paper.

Market Kurly also had to deal with concerns of some consumers, who did not trust paper packaging. The company said it has to add extra coolants and use extra wrapping to pack their products.

SSG.com said it had to build the infrastructure for electric vehicles to realize its plan of delivering products via electric refrigerated trucks.

“The cost of replacing the existing trucks with eco-friendly trucks wasn’t high since we’re renting the trucks, but developing the technology to construct electric refrigerated trucks has been challenging,” said an SSG.com spokesperson.

“To replace existing trucks with electric trucks, we need to install electric charging stations at our distribution centers in Gimpo, [Gyeonggi], and that costs money. On top of that, we also have to find ways to deliver items with electric trucks outside the metropolitan areas, where infrastructure for electric vehicles hasn’t been properly established.”

Delivery Hero said it was reluctant about following the eco-friendly movement since it creates additional pressure on restaurant partners.

“Restaurant owners are particularly busy at lunch and dinner time when orders constantly flow in,” said a spokesperson for the Berlin-based food delivery service. “Adding options for users to choose whether or not to receive spoons or side dishes is a burden for restaurant owners, when they already need to deal with orders and deliveries as well as the dining room all at the same time. Receiving specific requests from consumers means they have additional tasks at times when they’re already facing time constraints.”

Some restaurant owners aren’t able to meet specific requests from eco-friendly consumers because they’re too busy.

“But we can’t demand restaurant owners to strictly follow specific requests from eco-friendly consumers, because that would just be an abuse of power,” the spokesperson added.

Prof. Seo Yong-gu, who teaches business at Sookmyung Women’s University said, “It is inevitable for retailers to move in a direction in accordance with the consumer sentiment.”