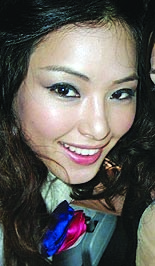 Lee Ha-nui, who recently took fourth place at the 2007 Miss Universe, is set to co-host “Real Time TV Entertainment,” on the national TV network, SBS, a 12-year-old show focusing on show business.
“I was very impressed by Lee’s attitude at the 2007 Miss Universe competition,” said producer Park Sang-wook. “That’s why I chose her as a co-host even though there were many other veterans competing for the job. She has great communication skills. She is also very good at English. I have no doubt that she will be a success.”
The 24-year-old won the Miss Korea title in 2006 in the national beauty pageant and fourth prize at the 2007 Miss Universe contest, which took place in Mexico City in May.
Recently she received a good response after co-hosting the special TV program, “Yes! I Love Pyeongchang,” for SBS Television on July 4. Pyeongchang did win the Olympics, but Lee succeeded in finding a new path for her career.
Lee’s agency said this doesn’t mean her career will be in entertainment. “She wants to represent traditional Korean beauty and culture to the world. And this is the first step toward fulfilling her goal,” said an official with Lee’s agency.
Lee is to host the program from July 18, along with Seo Gyeong-seok.
By Yang Yeon-hee