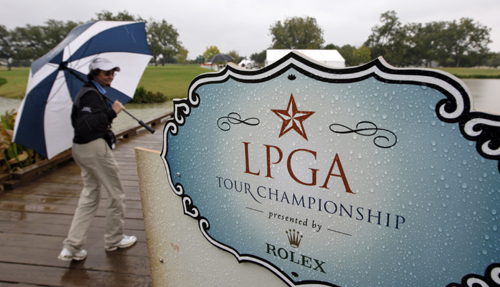 Tournament volunteer Robin Anderson tries to keep dry during a suspension of play in the second round of the LPGA Tour Championship golf tournament on Nov. 21 in Richmond, Texas. Golfers were unable to begin play due to the rain, and tournament officials hope to resume play Sunday U.S. time. [AP]

HOUSTON, Texas - Heavy rain on an already-sodden course washed out play Saturday and forced officials to shorten the season-ending LPGA Tour Championship to 54 holes, to be completed on Monday. More than 1.2 inches of rain fell at the Houstonian Country Club from Friday morning United States time until officials made the decision on Saturday afternoon to call it off for the day.

“Instead of getting a little bit better, it’s gotten worse,” said Doug Brecht, the LPGA’s vice president of rules and competition. “So we decided to not play anymore golf - or not play any golf [Saturday].

“We have a schedule for the rest of this event with an approximate start time of 8 in the morning [Sunday] for those players who have already begun their round and are on the golf course, with those that haven’t started starting at 8:20.”

Additionally, Brecht said that a “halfway cut will be made to the low 70 scores and ties and the third round will be played Monday.”

Brecht said the plans hinge on the condition of the course, which was to be re-evaluated later Saturday. No player completed the second round on Friday, and the first-round leaders haven’t yet teed off for round two. World No. 1 Lorena Ochoa, fighting for a fourth straight Player of the Year award, was the first-round leader after a 66 on Thursday.

South Korea’s Shin Ji-yai, seeking to end Ochoa’s Player of the Year reign, carded a first-round 70. American Cristie Kerr also has a chance to seize the Player of the Year award, and Brecht said full points and prize money will be awarded for the event even though it won’t go the full distance. Brecht said that under LPGA rules, a tournament can be declared official if only 36 holes are played.

“We’re going to do everything we can to play 54 holes. If we have to cut back to 36, at that point in time we’ll make those decisions and comment further about that.”

Brecht said that once officials decided to play through Monday, they had the option of trying to squeeze in 72 holes. But they decided time was just too tight - especially with the U.S. Thanksgiving holiday coming up on Thursday.

“Rather than forcing people’s hands and probably forcing them to stay on Tuesday to finish, we felt it was in the best interest of this event and for our players and everyone concerned to now shorten this event to 54 holes,” Brecht said. AFP