Koreans have long believed themselves to be of “pure blood.” But to make sense of a notion that usually strikes people outside the country as extreme, it may be necessary to place the concept in a larger social and historical context.

Maintaining sovereignty has never been easy for Korea. Its geographical location has made it an easy, irresistible mark for frequent foreign invasions for centuries. In that context, racial homogeneity has helped to create a sense of unity. Unity was needed to trigger nationalism in people, and that in turn was an essential element needed to get their citizens to fight for their country.

But there is no doubt that Koreans’ attachment to bloodlines is no longer in sync with the present.

Today, the foreign population in Korea is rising at a remarkable pace. According to Statistics Korea, there were more than 1.1 million foreigners residing in Korea as of May 2009.

Almost two decades earlier, in 1990, the number of foreigners registered in Korea was 49,507, according to statistics from the Justice Ministry. 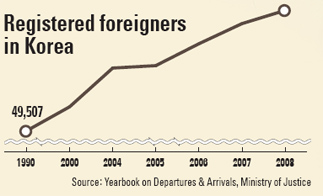 In addition, according to the statistics bureau and Ministry of Public Administration and Security, one out of every 10 marriages in Korea was an international marriage in 2008. The figure in rural areas, however, was four out of every 10 marriages. So it comes as no surprise that these so-called “multicultural” families - Korean nationals (generally male), their foreign spouses and their children - make up 1.7 percent of all Korean households today.

“The change has come about as Korea’s status in the world has changed. Korea was once a country that exported labor, but since the 1980s, it’s become a country that imports labor,” says Han Geon-su, a cultural anthropology professor at Kangwon National University. “This has forced the country to shift away from its existing social paradigm, which is based on racial, national and cultural homogeneity, to allow for cultural diversity.”

But the shift has been quite painstaking so far, especially with the world watching so closely. In 2007, the United Nations Committee on the Elimination of Racial Discrimination urged the Korean government to recognize the multiethnic character of contemporary Korean society, saying that it is concerned with the emphasis placed on the country’s ethnic homogeneity. The global body requested that Korea take appropriate measures to embrace cultural diversity through such fields as teaching, education, culture and information.

In October last year, Amnesty International criticized Korea for discrimination against migrant workers, pointing to incidents of sexual abuse, racial slurs, poor working conditions and inadequate safety training, among others. A month later, a Korean man was convicted of racism for the first time, after an Indian man filed charges against him for hurling racial slurs at him on a bus. Prosecutors had to press charges under criminal law because Korea does not have a law prohibiting language or actions that discriminate against race.

Also in a survey conducted last month by the Lee Myung-bak administration’s National Brand Committee, respondents picked “failure to embrace cultural diversity” as the second biggest obstacle in improving Korea’s image abroad. It was the runner-up to the inter-Korean conflict on the Korean Peninsula.

Speaking to reporters in Korea last year, Shin Gi-wook, director of the Shorenstein Asia-Pacific Research Center at Stanford University, said that “the reality is changing quickly and the historical basis for emphasizing one blood is gone.”

Shin’s book “Ethnic Nationalism in Korea” was published in the United States in 2006, which analyzes Koreans’ belief in a racially distinct and ethnically homogeneous community. The Korean language version of the book was released by a local publisher last year.

Shin also argues that while Korea is fast becoming a multinational society, people’s perceptions and attitudes are still stuck in a monocultural, racially homogenous mode and that it is crucial that the disparity between the two be quickly narrowed.

Statistics released by the Ministry of Health, Welfare and Family Affairs in 2005 that say that more than half of the multiethnic families in the country are in the low-income bracket have prompted further action.

There are now classes for foreign spouses on Korean language, culture and cooking. Also available are programs for their Korean partners that teach about their spouses’ cultures. There are even classes for the teachers of mixed-race children, who often face harsh discrimination at school.

One beneficiary of a program for multiethnic families is a 25-year-old Vietnamese woman who goes by the Korean name Song Ha-yeon. She came to Seoul from a small village south of Ho Chi Minh three years ago when she married a Korean man. This year, two days before Christmas, she finished a course for multiethnic families designed by KT Corp., Korea’s largest phone and Internet company. The classes provide instruction in Photoshop and other applications. The aim is to help people build relationships with their new Korean families.

“I’m trying my best,” Song kept repeating the words with hopeful eyes. “My son is three years old now. I hope to do a lot of things with him as he grows - help him with his homework, play computer games together. That’s why I’m trying my best.”

Like Song, there are many women who have benefitted from programs such as these. However, with so many programs in place, and more on the way, there is concern that the aim of these programs will become fractured, which could lead to confusion among the people they are trying to serve. 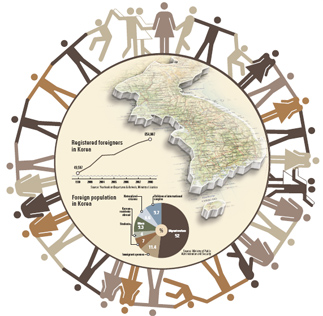 According to Park Yeong-sik at the Korea National Information Society Agency, which has been helping multiethnic families adapt to Korean society by offering computer and Internet classes since 2006, there are at least seven government ministries involved in devising policies pertaining to multiethnic families, which he worries could result in incoherent strategies.

Last month the Lee Myung-bak administration launched a committee under the Office of the Prime Minister with the primary goal of offering Korean language instruction to foreign brides and their children. However, the question of whether the committee will help the ministries work together - or will only add to their already scattered list of responsibilities - remains to be seen.

Kim Yang-eun, a professor of journalism at Chung-Ang University also points to the fact that most of the existing programs are organized with the underlying notion that they will help minorities to adjust to life in Korea, and that there are fewer programs to help sensitize their Korean family members to the new culture.

“Programs for multicultural families tend to be considered as a part of social welfare programs, but this mind-set is one of the first things that has to change,” she says. “The programs shouldn’t be seen as falling under the category of ‘charity,’ but as a learning experience that is part of a changing social paradigm.”