A special night for Tevez

A special night for Tevez 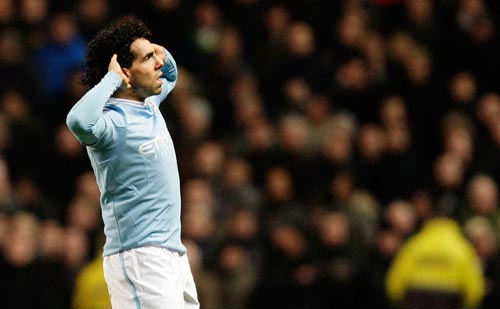 LONDON - Carlos Tevez continued his remarkable scoring run on Tuesday with both goals in Manchester City’s 2-1 win over Manchester United, setting up a mouth-watering second leg of the team’s League Cup semifinal.

Tevez took his tally to 13 goals from his last 11 matches as City edged the first leg of their derby cup-tie at Eastlands against his former team, although the holders are confident they will bounce back at Old Trafford on Wednesday.

“That was special for me. The goals were for the City fans,” Tevez told the BBC after a first-half penalty drew his side level and a second-half header won the match.

Ryan Giggs had put United ahead after 17 minutes and although the visitors pulverized the City defense for the last 20 minutes, they could not find an equalizer.

United manager Sir Alex Ferguson has dismissed City as “noisy neighbors,” while captain Gary Neville said this week the club made the right decision in allowing Tevez to leave.

The Argentine taunted United by making gestures with his hands after his goals as if to say “Who’s talking now?” but Ferguson refused to get involved in any debate about him.

He also declined to be drawn into a discussion about a penalty against City. Referee Mike Dean decided United defender Rafael da Silva had tugged Craig Bellamy down in the penalty area, but TV replays showed there was no contact.