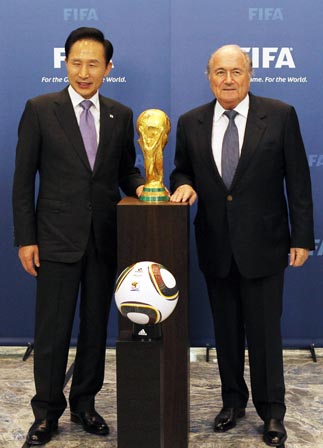 ZURICH - President Lee Myung-bak met with Sepp Blatter, the president of the International Federation of Football (FIFA) on Wednesday to drum up his support for South Korea’s bid to host the 2022 World Cup finals, Lee’s office said.

“I am very glad to meet you today and thank you,” Lee told Blatter at the start of the meeting at the headquarters of world football’s governing body. Blatter replied, “It’s my honor to see the head of state of the Republic of Korea at the FIFA house, definitely.”

The two men met for about an hour behind closed doors. “President Lee asked for President Blatter’s cooperation and backing for Korea’s bid to host the 2022 World Cup,” the Blue House said in a press release.