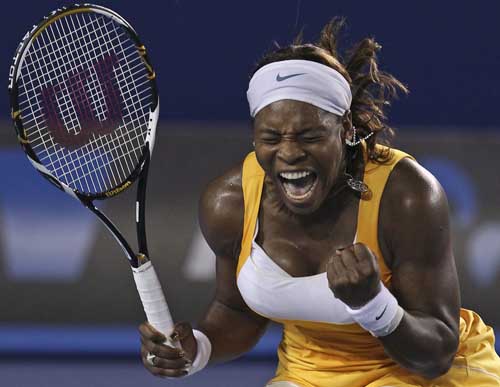 Serena Williams of the United States reacts to a point won against Justine Henin of Belgium during the Women’s singles final match Saturday. [AP]

MELBOURNE, Australia - Serena Williams loves a good underdog story, and she understood that most of the crowd was behind Justine Henin.

But all that sentiment was put aside once she heard an insult from the stands, a crack that went right to the heart of all athletes. Williams surged to a 6-4, 3-6, 6-2 victory in the Australian Open final Saturday, closing this chapter on Henin’s remarkable comeback from retirement.

“I think everyone was for Justine tonight,” Williams said. “But you know what really helped me out? This one guy was like, ‘You can beat her, Justine, she’s not that good.’

“I looked at that guy and I was like, you don’t know me,” Williams said, wagging her finger. “I think I won all the games after that because that’s totally rude.”

Williams plopped on her back at Rod Laver Arena after capturing her fifth Australian Open title, breaking her sequence of victories in this major in each odd-numbered year since 2003. It also gave her more Australian titles than any woman in the Open era and allowed her to match Billie Jean King’s career total of 12 majors in singles.

Henin, in her first Grand Slam and only second tournament since she quit suddenly in May 2008, had gone on a stunning run to win 20 of 22 points to even the final at one set apiece and take a lead in the third.

With her right thigh and left knee heavily taped and hampered by a litany of aches and pains, Williams had her backers in the crowd, her sister Venus among them.

But the knock gave her the most motivation.

“That is a part of being me. Hearing things like that inspires me to work harder, do better,” Williams said. “I feel like I have things to prove.”

Henin, unranked, fell one win short of emulating fellow Belgian Kim Clijsters’ amazing Grand Slam comeback at the U.S. Open last September. Clijsters beat Williams in the semifinals before taking the title at Flushing Meadows in only her third tournament after two years in retirement.

“It’s been a very emotional two weeks for me,” said Henin, a 27-year-old, seven-time Grand Slam singles winner. “I thought it would never happen again. It’s been almost perfect. Just the last step, I couldn’t make it.”

Henin slipped to 8-6 in her head-to-heads with Williams. But this was the first time they’d met in the Grand Slam final. In the even-numbered years between Williams’s triumphs in Australia, Henin won the 2004 title, had to quit during the 2006 final against Amelie Mauresmo and lost in the 2008 quarterfinals to eventual champion Maria Sharapova. That was her last major.

Williams has now won three majors in 12 months, including Wimbledon and the Australian in 2009. Her conversion rate in Grand Slam finals is 12 of 15, second only to Margaret Court.

Another set of American siblings won the men’s doubles. Twins Bob and Mike Bryan combined for their fourth Australian Open title, a 6-3, 6-7 (5), 6-3 win over Daniel Nestor of Canada and Serbian Nenad Zimonjic.

Roger Federer and Andy Murray were to play for the men’s championship last night. Murray is hoping to end a 74-year drought for British men at the majors. Federer, who has the record at 15 career majors, cracked that he thought the drought had lasted 150,000 years.

Still the 22-year-old Scot achieved something no British man has done in the Open era just by reaching two Grand Slam finals. His first ended in a straight-sets loss to Federer at the 2008 U.S. Open. Murray is more confident this time. AP