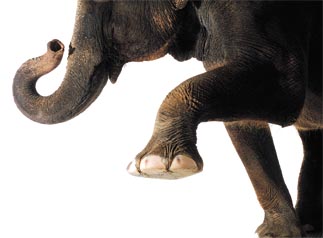 With cow elephants in Korean zoos long past the age of giving birth, senior diplomats are now struggling to find ways to bring young cow elephants to Korea.

Because an international agreement of the Convention on International Trade in Endangered Species of Wild Fauna and Flora prohibits governments from selling and buying elephants, the diplomats are asking elephant-rich nations such as Cambodia to donate some young cow elephants in return for economic assistance.

“It will be a serious problem if elephants disappear from the zoos, because they’re the most beloved animals among children,” said Lee Hyeon-ho, an official at the state-run Seoul Zoo. The zoo has a brace of 28-year-old elephants, but the cow is too old to get pregnant, Lee explained.

“We’ve tried various means to bring in new elephants from overseas, but it wasn’t easy at all,” he said.

The Korean Association of Zoos and Aquariums says it has only nine elephants registered, and all are past the menopausal stage. Without new cow elephants, there will be no newborn calves.

So the Foreign Ministry sprang into action to keep the country’s future elephant population steady.

Because several elephant-rich nations such as India and Thailand rigidly protect their elephant population, the Korean government couldn’t even suggest they donate some elephants here. So the government has anchored its hopes on Cambodia, which has both a large population of elephants and close ties to the Korean government. Foreign Ministry officials are mulling over providing the poor country with economic assistance in return for a handful of cow elephants.

But another hurdle awaits the diplomats.

“There’s not a consensus about the age of the elephants we need, and we need to work on this issue,” said a diplomat who asked not to be named. “If the working-level officials from the both sides fail to reach agreement on this issue, it could become an agenda item at a summit.”

Cambodia actually had expressed its intention to donate cow elephants of about 20 years old, according to the diplomat, but the Korean government wanted 5-year-olds who would be young and strong enough to give birth to many calves.

Another diplomat expressed concern that if Korea can’t win elephants from Cambodia, it could face a worst-case scenario - no more elephants in the zoos.

“We have a mission to ensure that children will be able to see elephants in the zoos, and we’ll work hard to make that happen,” the diplomat said.