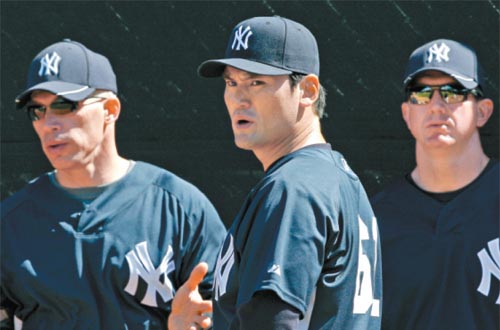 While the New York Yankees play their first spring training game tomorrow, against the Pittsburgh Pirates, the Boston Herald reported that manager Joe Girardi has decided to give Park more time to catch up on his training.

After helping the Philadelphia Phillies reach the World Series last season - pitching three and one-third scoreless innings against the Yankees - Park’s future went up in the air after the Phillies lost in six games.

Park had wanted to stay with the team, but when the Phillies couldn’t meet his terms he started looking for other avenues to return to the championship, the Herald reported.

During the offseason and early spring training, Park kept himself in shape by training with the Hanwha Eagles and Doosan Bears and a high-school team. And while the Yankees’ second game, against the Phillies, would be an ideal time for him to show off his form, Girardi pointed out that Park is about 10 to 12 days behind other pitchers.

Having joined his team’s spring training camp at Steinbrenner Field in Tampa, Fla., on Sunday, Park can use some more time to get adjusted to his new surroundings. Park pitched on flat ground on Monday and yesterday joined other relief pitchers in working off the bullpen mound.

According to reports yesterday, Park has been included on the team’s 40-man roster as one of the six relief pitchers on the squad, an indication the team does not want to rush the veteran relief pitcher. The Yankees’ coaching staff made room for him by dropping pitcher Edwar Ramirez,

“He’s a guy we’ve noticed the past few years, how he plays up out of the bullpen,” the American media quoted Yankees general manager Brian Cashman as saying. “I think our bullpen is a strength ...When Chan-ho Park was still on the [free agent] board this late and the ability to get him at $1.2 million, I thought that there was real value there. He makes us deeper.”