All F-5 jets grounded until probe is complete

All F-5 jets grounded until probe is complete 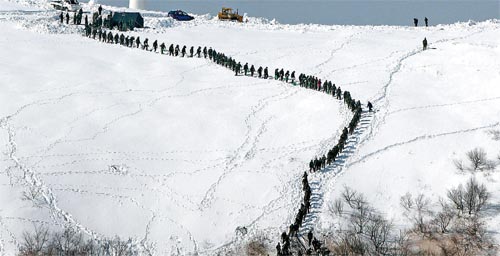 Soldiers yesterday comb Mount Hwangbyeong to recover the wreckage of two jets and the body parts of their deceased pilots following a crash Tuesday. By Kim Tae-seong


Following the crash of two South Korean Air Force F-5 fighter jets that took the lives of three pilots Tuesday, the Air Force ordered all air bases across the country to halt operations of F-5 aircraft until the final results of investigations into the incident are released.

“In addition to flight suspension of all F-5 jets for the time being, we have also directed all bases in the country to stop flying any military jets today,” said an Air Force officer at the Defense Ministry in Seoul yesterday. “The order was intended to implement safety checks on all aircraft. If there is no problem after the check-ups, we will permit some military aircraft to get back to their mission tomorrow.”

The Air Force, however, said it would allow some other fighter jets to conduct patrol missions in order to maintain combat readiness against possible military provocations from North Korea.

It is rare for the South’s Air Force to halt all flights of military jets for one day, the officer said. In the past, only the same type of aircraft that suffered crashes were ordered to halt flying.

Officials said that 140 Air Force and 100 Army personnel were sent to the scene on Mount Hwangbyeong to collect aircraft wreckage of aircraft and the deceased pilots’ body parts. The Air Force is consulting with surviving families about where and how funeral ceremonies will take place.

The officer said that the South Korean Air Force began its full-scale probe into the cause of the crash.

The Air Force said it is looking at four possible causes: pilot error, a midair collision, a loss of consciousness or engine problems. The Air Force indicated first two are the most likely. The operation was a training exercise for a beginner pilot.

“Weather conditions either around Gangneung Air Base, where the aircraft took off, and the crash site were not poor enough to ground military aircraft,” another Air Force officer said. “It will take some time to figure out the precise cause of the accident.”