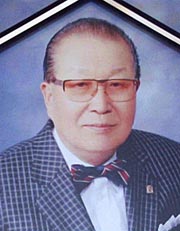 Astronomer Chou Kyong-chol, 81, nicknamed by Koreans as “Dr. Apollo” passed away on Saturday after falling into a coma at Yonsei Severance Hospital in Seoul. Chou, who was suffering heart failure, is survived by his wife, a son and a daughter.

Kim, a former chairman of the Korea Astronomical Society, was most noted here for his popularization of astronomy by giving the public easy explanations of aerospace terms in lectures and on TV.

Born in 1929 in Sunchon, North Pyongan Province (now under control of North Korea), Chou and his father came to South Korea before the Korean War, leaving his brother and mother behind in the North. Chou graduated from Yonhee College (now Yonsei University), with major in physics and earned master’s degree in astronomy at the University of Pennsylvania.

Kim returned to Korea in 1968 and taught at Kyunghee University and his alma mater Yonsei University after he worked as a researcher at the U.S. National Aeronautics and Space Administration (NASA). He served major posts related to aerospace research including director general at Korea Institute of Science and Technology Information. Kim earned his nickname after he fell from his seat in excitement while he was giving simultaneous translation of a live U.S. broadcast of the Apollo 11’s successful landing on the moon in 1969. In 1992, he set up an institute for astronomy to continue his own research. A planetarium and science center named after him is under construction in Mount Gwangdeok of Hwacheon, Gwangwon.