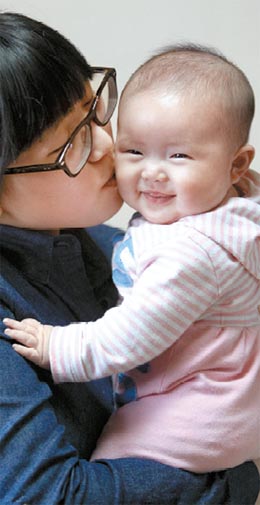 Kim Su-hyeon with her baby yesterday. Thanks to the human rights commission’s recommendation, Kim was able to graduate from high school and advance to college this year. By Kim Seong-ryong

The National Human Rights Commission said yesterday that any school that forces a student to drop out because she is pregnant is being discriminatory and infringing on her right to an education.

The announcement follows the case of Kim Su-hyeon, 19, a teenager who was forced to drop out during her senior year of high school last year because of a pregnancy.

Though many Western countries allow pregnant high school students to complete their educations, Kim’s case is the first of its kind in Korea to be decided by the commission.

Kim agreed to reveal her real name to the JoongAng Ilbo, commenting that she hoped her case would help other teenage mothers who have been forced to end their studies.

The result was devastating.

“I held on to the test kit and just wept,” she recalled. “Everything went black.”

After some discussion with Choi, Kim decided to have the child but also continue with her high school education. But when teachers learned of the situation, they told Kim to bring her parents to school because she needed to drop out or go to another school. They told Kim that school regulations state that any student who disrupts the moral code of the school with an “unwholesome relationship” is subject to expulsion.

The next day, Kim’s mother, Yang Gyeong-ae, 47, got on her knees and pleaded with Kim’s main teacher, saying that if her daughter was expelled, she would not be able to enroll again at a high school or even take a high school equivalency test.

Kim’s teachers, however, were adamant. She had to leave. They even threatened to report Kim’s boyfriend to police for having sexual relations with a minor.

So Kim dropped out, and Yang brought the case to the attention of the commission. Soon, the commission requested that the school take Kim back. After the school refused, the principal got a warning letter from the regional education office. The school finally relented and Kim was able to re-enroll in July and received her diploma.

Kim is far from being alone as a teenage mother. Data from the Health Insurance Review and Assessment Service shows that there were around 3,300 teenage births in 2008. According to a survey by the Korea’s human rights commission, 87.6 percent of teenage moms continued their educations. But one-third dropped out.

Korean regulations toward pregnant teenagers have been comparatively nonexistent when looking at other developed countries. In the U.S., a law banning the expulsion of pregnant schoolgirls was passed in 1972. In Britain, it is mandatory for a pregnant teenager younger than 16 to go to school. For those mothers, child care is provided by the state.

In Germany, unwed mothers are allowed to take pregnancy leave, in which their right to be educated at school is protected.

“Forcing a student to drop out is clear discrimination and goes against the student’s right to have an education,” an official at the human rights commission said. “If a teenager stops her education because she is pregnant, there is a high possibility she might not find a job and become entangled in a vicious cycle of poverty.”

Last December, Kim gave birth to a daughter, Si-eun, and is now a student in the tax and accounting department at Kimpo College. “My dream, upon hearing the baby’s heartbeat, became a reality. My goal now is to get a scholarship,” Kim said.