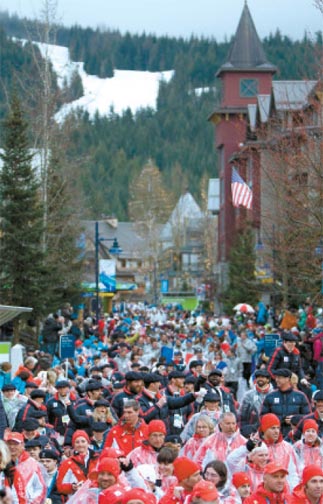 Whistler mountain is seen in the background as athletes march to the closing ceremonies of the Paralympic Winter Games in Whistler, Canada, on March 21. [AP/YONHAP]

WHISTLER, Canada - Fireworks lit the sky above this mountain village on Sunday night in a bright, noisy finale to a winter games organizers say boosted the Paralympics to a new level.

The games in Vancouver and Whistler showcased “fantastic competition at a very high level in all sports,” said Xavier Gonzalez, CEO of the International Paralympic Committee - and also drew a record global audience on television and the Internet, while a record 85 percent of tickets were sold.

The lowering of the flag late on Sunday formally ended 10 days of competition by more than 500 athletes from 44 countries in alpine skiing, biathalon and cross-country skiing, held in Whistler, and wheel-chair curling and ice sledge hockey in Vancouver.

The flag was then presented to Russian officials, setting the wheels in motion for the next Winter Games in Sochi in four years. Organizers of these Games were the first to promote the Olympics and Paralympics together, including by jointly naming some venues, such as the Vancouver Olympic/Paralympic Center curling rink.

“What that’s done for the Paralympic movement is take it to a whole new level,” said Blair McIntosh, Chef de Mission for the Canadian Paralympic Committee, adding that the lessons for London’s summer games in 2012 and Sochi in 2014 will be to prepare for greater public interest.

“Future hosts can gain from Vancouver and Whistler’s awareness and promotion of the Paralympics with the Olympics,” McIntosh told AFP.

At times the weather played havoc with alpine events, as rain, fog and heavy snow - sometimes all three at once - forced officials at Whistler Creek to reschedule downhill races.

Athletes from Russia dominated the podium, with Germany, Ukraine and Canada trailing far behind.

“Our desire is to show that everything is possible,” said Vladimir Loukine, the president of the Russian Paralympic Committee.

“Paralympic sport as a whole has growing interest worldwide, and people have an appetite to watch it,” Gonzalez said. He said the games’ opening ceremony on March 12 was shown live on German television at 3 a.m., and the audience “was the highest-ever live program at night in Germany. People stayed up late to watch it.”

Internet coverage reached 90,000 viewers, he added, compared to some 50,000 at the much bigger summer games in Beijing two years ago.

The games were free of the kind of major accidents and injuries that marked the start of the February Olympics here, which began with the death of Georgian luger Nodar Kumaritashvili in a horrific training accident.

To date only one incident of doping has been discovered, after random tests found that a Swedish wheelchair curler was taking a banned beta blocker prescribed by his doctor to control blood pressure.

“That’s the only case that has been identified, and we have completed 393 tests,” said Gonzalez, noting that only one doping case per games is normal for the Paralympics.

The games held surprises, especially for hockey-mad Canadians, who watched their national sledge-hockey team fall to Japan, and then fail to win a bronze after Canada’s men’s and women’s hockey teams took home Olympic gold.

“We were all surprised to see Canada not in the finals, and to see Japan coming up was a surprise. But that’s great because it shows the sport is growing,” said Gonzalez.

The upset is a positive symbol of the growing diversity of the games, he said. In the future he said the IPC expects global sports organizations to propose adding more sports to the games, including snowboarding, ski cross, a standing version of hockey, bobsleigh, luge and long track speed skating.