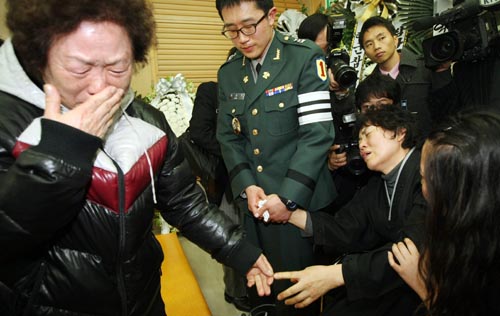 A relative of a missing sailor, left, expresses condolences to Kim Mal-sun, the wife of Warrant Officer Han Joo-ho. Han died Tuesday after falling unconscious while searching for crew members who went down on the Cheonan. [YONHAP]


Mourners yesterday paid their respects to a Korean Navy diver who died during rescue operations at the site of the sunken Cheonan, and sent heartfelt condolences to the surviving family of the deceased.

Han Joo-ho, a 53-year-old Navy warrant officer and member of the underwater demolition team, died Tuesday after losing consciousness while searching for missing crew who went down with the naval patrol ship.

High-profile government officials, lawmakers and fellow soldiers visited the altar at the Armed Forces Capital Hospital in Seongnam, Gyeonggi, as did some relatives of the missing Korean sailors for whom Han was seeking.

President Lee Myung-bak instructed cabinet ministers to treat Han with the highest honors at yesterday’s ceremony and the funeral today, according to Kim Eun-hye, a spokeswoman for the Blue House.

The funeral ceremony will be presided over by the Korea’s chief of naval operations.

“Han was a soldier who sacrificed his life for the sake of his country. He had devoted himself to defending the nation for 35 years,” Kim quoted Lee as saying.

Chung Chung-gil, the presidential chief of staff, and Kim Sung-hwan, senior presidential secretary for foreign affairs and security, visited the altar on Lee’s behalf to pay respect to Han and express sympathy to the bereaved family. 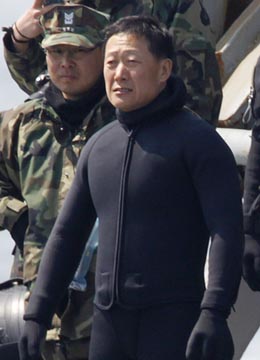 Han fainted while taking part in the days-long rescue operations in the frigid and murky waters near the Yellow Sea border with North Korea.

He was pulled out of the water by a fellow officer and sent to the U.S. salvage ship Salvo, but died during medical treatment.

The Defense Ministry in Seoul said Han appears to have lost consciousness due to the rough water current and strong water pressure.

“I cannot believe we had the last phone call on Monday,” cried Han’s wife, Kim Mal-sun, 56, on Tuesday.

Kim learned about Han’s death while watching television at her home in Jinhae, South Gyeongsang. When a diver’s death was first reported, she did not imagine it was her husband. She learned that he had been lost when military officers contacted her by telephone a few minutes later.

Kim said that Han was dispatched to the site of the downed ship last Sunday, while she was out mountain hiking. She was not able to send him off.

On Monday, she received two calls from her husband. In the last call, Han said that he had just boarded a ship that was heading to the spot where the Cheonan had been torn in two, and promised to call the following day, according to Kim.

Han, who joined the Navy in 1975, is survived by his wife and two children, a son and a daughter. His son, Sang-ki, 25, is an active-duty first lieutenant in the Korean Army, and his daughter, Seul-ki, is a 19-year-old college student.

“I talked to my father over the phone last night [Tuesday],” Han Sang-ki said. “He said he had begun search and rescue operations on Sunday evening. I didn’t want him to go on the mission, but he wouldn’t listen. So I told him to be careful.”

The son added that his father believed in his family and the military.

“He used to say he wanted to live with honor,” he said.

Han was a 35-year veteran of the underwater demolition team. He was commissioned as a warrant officer in 2000 and was scheduled to retire in December 2012.