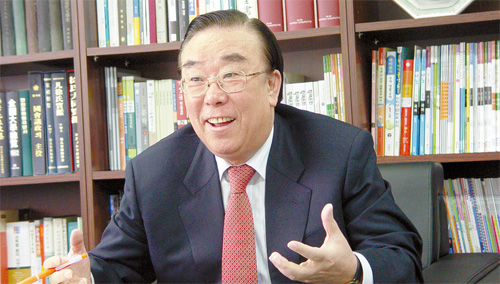 Suh Han-saem, once a star television instructor, is now the head of Ibse, an educational broadcasting company that offers a variety of classes online in a bid to help low-income families reduce private education costs. [JoongAng Ilbo]

In the 1980s, Suh Han-saem, 60, was a star instructor. His oft-repeated saying, “Underline this!” was so popular that comedians used to imitate him.

Recently, Suh returned to Incheon, his hometown, to work for an education welfare service that operates via the Internet. He says his motivation for leading the service rose from a desire to aid students who are unable to afford expensive private tutoring.

After his stint as a television and radio instructor, Suh ran for and won a seat at the National Assembly in 1996 representing Incheon and Yeonsu, and served until 2000, when he lost his seat in the general election.

Last June, Suh was named president of Ibse, an online educational broadcasting company based in Incheon, after a meeting with Incheon Mayor Ahn Sang-soo.

Suh he was entrusted with the responsibility in part because of his belief in the importance of reducing private tutoring fees through an increase in education broadcasting.

Ibse Broadcasting is a private-public cooperative education broadcasting company that was established as a joint venture between the city of Incheon and E-Starco, a Seoul-based real estate company. Ibse was launched last October to provide elementary, middle and high school students with the opportunity to receive tutoring after school hours.

Although Incheon is situated close to the capital area, the academic abilities of the students in Incheon are consistently ranked among the lowest in the nation. About 50,000 Incheon students move to Seoul every year, which partially accounts for this phenomenon. Yet Suh believes that there are other causes, including the rapid growth of the city and an increase in the number of people who are excluded from private education due to their income.

The Internet lectures are modeled on those offered by a similar company in Gangnam, but Ibse has increased the range of offerings to include lectures for elementary and middle school students. Suh manages a total of five studios, four in Seoul and one in Incheon. He purposely placed most of the studios in Seoul to attract as many star instructors from Gangnam as possible.

Currently, Ibse offers a total of 2,000 lectures - 600 for elementary school students, 700 for middle school students and 700 for high school students. In addition to the online classes, Ibse also has a mentor program to help students overcome the limitations of self-study. Former teachers and homemakers with advanced degrees are dispatched to study rooms, churches and after-school classrooms to manage and aid the students’ learning.

Three million students were enrolled in the program in the first five months after it was established. Suh aims to push this number past 5 million within the year.

Suh also launched the I-Start social scholarship project to provide free courses and textbooks to students from low-income families. This service provides one-year scholarships in the amount of 3 million won ($2,669), which allows students to enroll classes such as essay writing and conversational English.

Meanwhile, Suh keeps his teaching skills up to date by teaching Korean classes to students in middle and high school as well as a course called “Successful Education for Children” for parents.