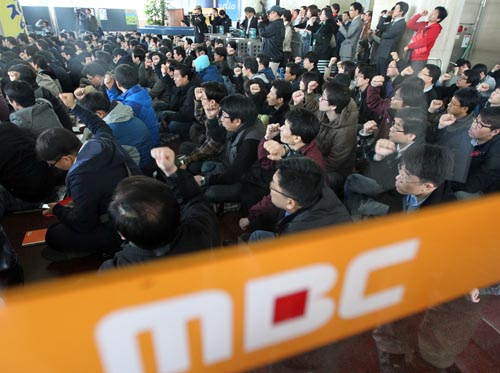 Union members including anchors at MBC’s prime-time “News Desk” and other journalists refused to work from 6 a.m. Non-union reporters and anchors temporarily handled TV and radio programs for the nation’s second-largest broadcasting company.

“Kim broke a promise to the labor union and appointed Hwang Hee-man, a special member of the board of directors, as MBC’s vice president, and he hasn’t yet filed a libel suit against Kim U-ryong, the former chairman of the Foundation for Broadcast Culture,” Yeon said.

In an interview with the monthly magazine Shindonga in February, Kim U-ryong said high-ranking officials in the Blue House played a role in determining MBC’s management and that the MBC president was also involved.

MBC President Kim Jae-chul demanded Kim U-ryong’s resignation and said he would sue him for libel.

Meanwhile, the Ministry of Labor issued a press release calling the strike illegal, and warning union members that they could face legal consequences. “The appointment of the vice president has nothing to do with the union members’ working conditions, and staging a strike to say they’re against it is clearly illegal,” the press release read.

Kwon Hyeok-tae, a senior official of the ministry’s union-management dispute division, said MBC’s strike is not protected under the labor law and is “an obstruction of business.”

The board of directors of the Foundation for Broadcast Culture in February selected Kim Jae-chul, a veteran journalist and then-head of the MBC Cheongju station, to replace Ohm Ki-young on Feb. 26. Ohm resigned in protest of the board’s decision to appoint key MBC executives he had not recommended.

When Kim tried to enter the station headquarters in Yeouido on March 2, MBC union members protested his appointment and physically blocked him from walking into his office. The union members said Kim being named to the post was a “political parachute appointment,” a Korean insult indicating cronyism.