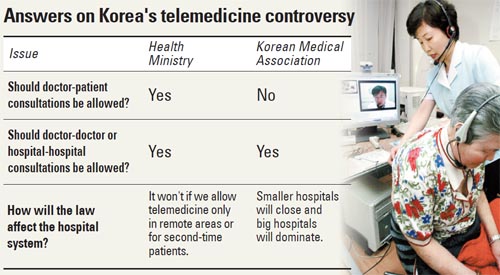 Medical consultations via TV or the Internet will be available for citizens in rural areas, after the National Assembly yesterday approved a bill making telemedicine practices legal. The bill is expected to take effect sometime next year.

Previously, only telemedicine consultations between doctors and medical experts were allowed. With this revision doctor-patient consultations through TV, the Web or smartphones will be legal.

The Ministry of Health and Welfare estimates that with this revision, around 4.5 million people will benefit from telemedicine consultations. This includes residents in remote or rural areas, the disabled, military personnel and prisoners. Telemedicine consultations will save around 430 billion won ($382.8 million), per year the ministry added.

But doctors are opposing the bill, saying that telemedicine practices might not be safe and will ultimately lead to the collapse of the present hospital system.

“Although we agree in theory that telemedicine will be beneficial, we are opposed to telemedicine consultations between doctors and patients,” said the Korean Medical Association yesterday in a press release. The KMA is the largest doctors’ group in Korea.

The association also said that telemedicine practices need to be thoroughly re-evaluated and that related pilot projects must be conducted before passing the bill. It warned that “If the government ignores the advice of medical experts and patients’ safety, and if the present hospital system is compromised, the government will have to take sole responsibility.”

Kim Joo-han, a Seoul National University professor in charge of SNU hospital’s pilot programs for telemedicine practices, said that because the bill is limited to residents of rural areas, the effect will be minimal because rural deliveries of medicine will still be expensive.