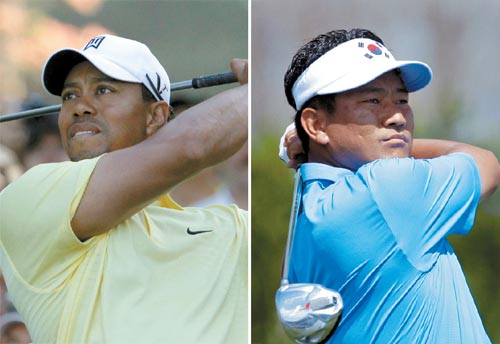 AUGUSTA, Georgia - Tiger Woods has an ideal tee time for his return to golf at the Masters - at least as far as TV is concerned.

After weeks of speculation about his playing partners for the opening two rounds at Augusta National, the starting times released on Tuesday had more to do with “when” than “who.”

Woods is scheduled to tee off at 1:42 p.m. today (U.S. Eastern time) in the penultimate group for the second straight year. Barring any delays, his group will likely be on about the eighth hole when ESPN’s live coverage begins at 4 p.m. It will be the first time Woods has competed since a shocking sex scandal began to unfold the day after Thanksgiving.

Joining him for two days will be Matt Kuchar, a popular figure in these parts from his All-American days at Georgia Tech; and Choi Kyung-ju of Korea, which is sure to appeal to Augusta National’s broadcast partners in Asia.

Woods is to start at 10:35 a.m. tomorrow, limiting coverage of him to live streaming on the Masters’ Web site.

ESPN Executive Vice President John Wildhack said every “meaningful shot” by Woods will be shown by the network at some point, whether live or as part of highlights.

At any other tournament, playing with Woods could be a huge distraction because of the number of photographers and reporters tagging along, and fans outside the ropes scrambling for a view.

No one is allowed inside the ropes, and fans walk en masse - there’s no running at the Masters.

“It’s going to be a lot more at ease this week than most weeks,” Woods said Monday before he knew of his starting times. “If there’s one week that you would rather have a pairing with me, considering the circumstances, it would probably be this week.”

Choi sure didn’t mind. He was hoping for it.

Despite some language barriers, they are comfortable playing together. Choi last played with Woods in the third round of the Memorial Tournament, which Woods went on to win. This will be Choi’s 13th time playing with Woods.

“Even when all this came out and the rumors of Tiger coming back, my friends were saying, ‘Wouldn’t it be cool if you were paired with Tiger when he played his first tournament?’” Choi said through his interpreter and agent, Michael Yim.

“It’s funny because I sort of had a feeling when I left Dallas that it would be cool if I was paired with Tiger, and it happened,” he said. “It’s a good surprise.”

Choi found out on the 14th hole from a Masters official.

If it didn’t sink in at the time, there were a dozen reporters waiting for him as he walked off the 18th green after his practice round. Choi can expect a lot more attention when he tees off today.

“I like playing with big crowds,” Choi said. “I will probably play more aggressively.”

The gallery following Woods the first two days of practice this week has been enormous, and polite. Woods has received ovations and the occasional “Welcome back, Tiger,” while playing with Fred Couples on Monday and Mark O’Meara on Tuesday.

Choi expects that to continue.

“It’s important that the gallery realize what’s going on,” he said. “To take what happened outside the golf course and bring it inside the golf course, I don’t think that’s right. I believe they’re educated and will respect the game of golf.”

Steve Stricker will be playing in the group ahead of Woods and doesn’t expect any problems. At other tournaments, players have said that could be the toughest spot as photographers walk ahead to get into position.

“I don’t think it’s going to be that big of a deal,” Stricker said. “There’s a lot of strict policies here. There’s no running up and down the fairways. It’s pretty calm. Typically, each green is loaded with people, anyway. It doesn’t matter when you go out there. It’s five people deep up at each green.

“I think if anywhere you want to be paired ahead of him, this would probably be it.”

PGA champion Yang Yong-eun is with Phil Mickelson and Robert Allenby on the opposite end of the draw from Woods, teeing off at 10:35 a.m. today and 1:42 p.m. tomorrow.