Damages can be the best revenge

Damages can be the best revenge 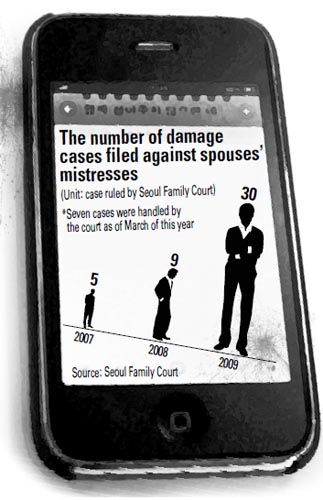 In early 2007, a 40-year-old homemaker cheated on her husband with a man she met in an Internet chat room for photographers.

Her husband grew suspicious after he saw her getting text messages late at night. When he checked her cell phone, he found photos of her on a trip with the other man.

Then she ran away with him.

And her husband ran to court, and got even.

Korea is one of the shrinking number of countries in the world where adultery is a criminal offense, but today many of the heartbroken are opting to seek financial revenge instead.

As fewer cases end with jail time for the adulterer, more are ending in damages.

In the case above, the Seoul Family Court in January awarded the wronged husband 50 million won ($44,622) for the loss of his 10-year marriage.

Of the 1,157 people who stood in court on adultery charges last year, only 2.93 percent, or 24 people, received a prison sentence.

With jail terms on the decline, fewer criminal charges are being pressed, as more people whose marriages have run aground realize that the best revenge is a claim for damages rather than adultery.

The new trend has seen the number of lawsuits seeking compensation for psychological distress jump from five cases in 2007 and nine in 2008 to 30 in 2009.

But even when the plaintiffs win, experts say the award might be a little empty.

In the 2007 case, the husband had wanted to stay with his wife, and she originally said she would leave his rival and remain in the marriage.

He pressed his charges only after she left him.

“Some people file for damages against their spouse’s partner because they want to get their spouse back,” but that’s often unsuccessful, said Lee Seon-mi, a judge at the Seoul Family Court.

“Many split in the end because their conflicts between them grow deeper during the trials,” Lee said.

“If they want to keep their family, they should try to talk their problems out before taking the matter to the court.”