This mascot is a national treasure

This mascot is a national treasure 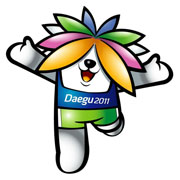 The organizing committee of the IAAF World Championships Daegu 2011 unveiled its mascot and schedule yesterday, 500 days before the global track and field event kicks off in the city of Daegu in August 2011.

The mascot, a shaggy canine character temporarily named Sabi, is a sapsal dog. Indigenous to Korea, sapsal dogs were designated as National Treasure No. 368 in 1992.

At a press conference in Seoul’s Press Center, organizers said the biennial championships will open on Aug. 27, 2011, in Daegu, south of Seoul. The races will run for nine days, according to the schedule approved by the International Association of Athletics Federation. Track and field athletes will compete in 47 events.

The main evening sessions will feature only semifinals and finals of each event, while all qualification rounds will take place in the morning to attract larger crowds, the committee said. The men’s marathon will close the event.