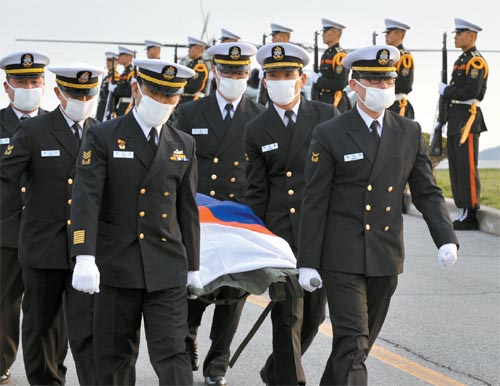 Navy servicemen carry the remains of a fallen Cheonan sailor yesterday afternoon to the headquarters of the Second Fleet in Pyeongtaek, Gyeonggi. [Joint Press Corps]


The stern of the sunken naval warship Cheonan, hoisted from the Yellow Sea yesterday, was in tatters, damaged almost beyond recognition. And every bit of damage gives experts a clue to the cause of its fate.

After having a closer look at that damage, military officials and analysts yesterday narrowed down the possible cause of the sinking to an external shock, likely a torpedo attack.

While the Navy hasn’t officially announced the cause of the mysterious blast that split the 1,200-ton corvette in half on March 26, observers ruled out some early theories.

Judging from severe damage to the side of the stern, observers said the sinking couldn’t have been from metal fatigue.

One military official said if metal fatigue was the cause, the exterior would have been “smoother, like the side of a slice of cake.”

Another military official dismissed the possibility of an internal explosion.

“The damaged, green-colored section on the stern appear to be the urethane flooring of the cafeteria. Some powerful underwater blast destroyed the deck and tore through the flooring,” the official said. “The damaged area is bent in an inverted V-shape. It had to be some impact from underneath.”

Retired Navy Capt. Jin Gyo-joong, an expert in maritime incidents, speculated that a torpedo was the most likely cause.

Jin, now head of the security planning office at the Financial Supervisory Service, said if the ship had crashed into a reef, the upper part of the stern wouldn’t have been as badly damaged.

Discussing the possibility of a sea mine explosion, Jin said such a mine is normally planted too deep under water to have enough power to destroy a warship of the Cheonan’s size.

“Sea mines are sometimes detonated about 50 meters [164 feet] under water, and that’s too far from the bottom of the vessel to have any major impact,” Jin said. “Something went off quite close to the Cheonan. It could have been a buoyant naval mine but fast currents in the area make that unlikely. My money is on a torpedo.”

Other experts said it wouldn’t have been enough for a direct hit from a single torpedo to split the 1,200-ton Cheonan. They instead point to the “bubble jet effect” created by a mine or a torpedo detonation.

According to a report by the Australian Department of Defence, titled “The Response of Surface Ships to Underwater Explosions,” the bubble jet effect occurs when a mine goes off under a ship at some distance.

The explosion creates a hole in the ship, and it collapses because of the change in pressure. That creates a water geyser that can shoot up to 100 meters (330 feet) into the air, according to the report.

A high-ranking military official who looked at the stern said a strong external shock appeared to have created a bubble jet effect that destroyed the Cheonan.

While harpoon missiles near a severed part were missing, the opposite end of the stern was mostly intact. That suggests the explosion was concentrated in certain parts of the ship, and that is only possible with the bubble jet effect caused by a torpedo or sea mine detonation.

“An internal explosion would have caused greater harm to the rest of the stern,” said Ahn Choong-sung, professor of ocean system engineering at the Korea Advanced Institute of Science and Technology. “I suspect an outside shock from underneath the vessel. And it would have taken some major torpedo to tear apart the ship.”

Ahn Ki-seok, a former Naval Operations commander, noted that the left side of the ship sustained damage in an oval shape, yet another indication of external impact.

Another reason that analysts ruled out an internal explosion was the safety with which the Navy handles munitions aboard.

“Naval ships keep munitions with fuses and explosive materials in separate areas, so accidental explosions almost never happen,” said Yoon Yeon, also a retired Naval Operations commander. “The storage rooms have multiple locks and it is difficult for most people on board to access them.”

North Korean involvement, either through torpedo or naval mines, has been suspected. The South Korean government, however, continued to caution against reaching a conclusion.

“First and foremost, we have to determine the cause,” said Foreign Ministry spokesman Kim Young-sun. “Once it’s done, then we’ll review appropriate options. I think it’s not yet appropriate to make any assumptions.”

But Kurt Campbell, the U.S. assistant secretary of state for East Asian and Pacific affairs, at least hinted at a North Korean role in the sinking of the Cheonan. Campbell told reporters in Washington yesterday the United States would first find out why the warship went down before seeking to bring the North back to the six-party talks on ending its nuclear weapons programs.

“At this juncture, we told our South Korean friends that our primary objective is to work with them on the recovery of the ship and, at that point, we will be able to make some judgments about the way forward,” Campbell said.

“We want to be very clear that there is complete agreement between South Korea and the United States about [the] next steps, if there are to be next steps, given recent developments. So we want to coordinate very closely vis-a-vis North Korea.”