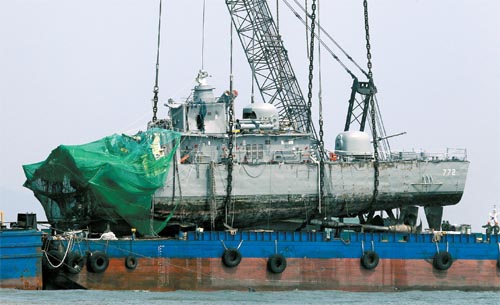 The stern of the Navy corvette Cheonan was hoisted from the Yellow Sea and docked on a barge yesterday, 21 days after an unexplained explosion caused the ship to sink near Baengnyeong Island. A search team penetrated the stern to find the remains of most of the 44 missing sailors. By Kim Seong-ryong


Nearly three weeks after the unexplained sinking of the Navy corvette Cheonan, the bodies of 31 of the 44 missing sailors were recovered from the salvaged stern of the ship as of 8:50 p.m., the Ministry of National Defense said yesterday.

A massive operation to lift the stern from the sea floor began at 9 a.m. yesterday when a crane raised the rear section of the ship at a speed of 1.6 meters (5.2 feet) per minute. In the afternoon, the stern was hoisted onto a barge, allowing investigators to enter it to search for bodies.

To help identify the bodies, four representatives of the 44 missing sailors’ families boarded the barge.

“We were able to enter the dining room inside the stern around 3:15 p.m.,” said Won Tae-jae, Defense Ministry spokesman.

Of the recovered bodies, Seo was identified immediately because his family member was on the scene as a member of the search and identification team, said a military source.

“Entering the stern is extremely difficult,” said Commodore Lee Gi-sik, chief of information operations at the Joint Chiefs of Staff.

Lee said the engine control room and kitchen are located in the severed section of the stern. No bodies were found in those areas.

Of 104 sailors aboard at the time of the sinking, 58 were rescued and 46 sank with the ship. The bodies of two sailors were later found in the sea.

As the nation’s broadcasters aired live the raising of the Cheonan and the search for the missing sailors throughout the day, the sailors’ families’ attention was glued to televisions at the Navy’s Second Fleet command in Pyeongtaek. When they heard that bodies had been recovered, many broke into tears.

The grief-stricken mother of Petty Officer Bang broke into tears and was initially speechless. “My son was such a thoughtful boy, who never complained about his service,” she said. “Instead, he worried about his parents.”

“Everyone is gripped by sorrow,” said Lee Jeong-guk, a spokesman for the sailors’ families.

About half of the 16-meter-high stern was lifted above the water at 9:33 a.m. yesterday, and workers pumped water out. “The compartments were full of water, and there appeared to be no air inside,” a military source said.

By 12:11 p.m., the stern was completely lifted above the surface to be placed on a 3,000-ton barge. By 3:05 p.m., lights were installed and a passageway created for the search operation.

According to Lee, the remains recovery operation will continue through Thursday night.

The military said bodies recovered from the Cheonan would be transferred to the Navy’s amphibious landing ship Dokdo. After initial identification and examination, the bodies will be moved to the Navy’s Second Fleet Command in Pyeongtaek via helicopters.

The National Defense Ministry’s investigation team and forensic medical specialists from the National Institute of Scientific Investigation will examine the bodies before moving them to a morgue inside the base.

Lee said the barge will move the stern to the port of Pyeongtaek after all bodies have been removed. The 155-mile trip will take about 26 hours, he said.

Lee said a set of torpedo tubes and two Harpoon missiles are missing from the Cheonan, while all anti-submarine depth charges were discovered. The military is also conducting a search near the sinking site to recover missing pieces of the ship.

As the bodies of the missing sailors were found, the military and the families began preparations for funerals. The Navy said yesterday it will host the funerals after discussing details with the families. The funerals are expected to take place at the end of this month, as identification of some bodies may take time.

On Wednesday, the families formed a funeral committee. They also decided not to request further search operations from the military if fewer than 44 bodies are recovered from the ship. They decided that any sailors not recovered should be regarded as having given their lives for their country.

“No matter what happens, we will recover all the bodies. That’s the least the state can do for our servicemen,” responded a Defense Ministry official.

“There are no words to comfort the families,” President Lee Myung-bak was quoted as saying as he was briefed about the salvage and search operations. “The state will remember their sacrifices forever. An investigation is ongoing to find out the facts of the case through international cooperation. A thorough and scientific probe will win the trust of the people and the international community.”