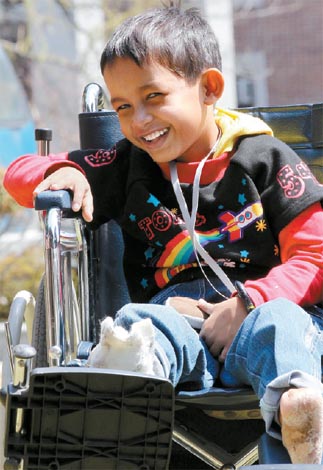 Khat Seyha is the recipient of surgeries that will reconstruct the damage to his foot and ankle. By Byun Sun-goo

It was February 2009 when Choi Man-ho, the chief of the Nest Association, a Korean charity group, met Khat Seyha, a Cambodian boy with a crippled right foot. Seyha looked no older than five when they met.

That day, Seyha’s grandfather walked into to an orphanage run by Choi near Phnom Penh with his hands tightly wrapped around Seyha so that the boy would not fall. Seyha’s right foot was severely disfigured in a shape resembling a banana and all of his toes were missing.

Even while the grandfather tearfully begged Choi to help the boy, who was actually 10 years old at the time, Seyha kept stumbling on the orphanage playground.

Seyha fell into a boiling pot when he was three, which left his right foot and ankle severely burned. Medical treatment was an unaffordable luxury, so there was little the family could do other than to wrap the injured parts with scraps of cloth.

Although the pain slowly began to dissipate, all the toes on Seyha’s right foot began sinking into the disfigured skin growing over the foot. Over the next seven years the foot became covered with hard, shell-like scabs.

Seyha’s misfortune continued when his mother died. Later his father abandoned the family, leaving him in his grandparents’ care. But in 2008 Seyha’s grandmother died, and the job of caring for the boy fell to Seyha’s grandfather, who was increasingly ailing and nearly bedridden.

When Choi saw the boy’s severely disfigured foot and limping gait, he had a vision of what Seyha’s future could be like.

“A lot of kids here follow you around, begging for a dollar, and a disabled boy like Seyha would be a perfect recruit for the street-begging business,” Choi said. “I couldn’t let that happen.”

Seyha was accepted to the orphanage, fed three times a day for the first time in his life and sent to school.

And he started having dreams he had never had - of driving his own car and becoming a tour guide. Many Cambodian kids dream about being a tour guide, which is one of the most sought-after jobs in the country. For Seyha, with his dysfunctional right foot, it would have been impossible.

Seyha’s life changed again when Kim Young-ki, a publisher of Science MD News, a medical trade paper, spotted Seyha last October. Kim was visiting the area as a medical volunteer, and he took the boy to a nearby hospital to get X-rays of Seyha’s foot. Later, he showed the images to Seong Sang-cheol, the president of Seoul National University Hospital. Seong told Kim that Seyha’s foot looked treatable and offered to do the surgery for free.

Seyha, who was born in a small town where most villagers are said to die without ever stepping foot outside the area, soon found himself on a plane flying the thousands of miles to Korea. He arrived on March 16.

He even had the good fortune to see a late winter snowfall. It was the first snow he’d seen in his life.

Seyha had two surgeries on his right foot that extended his foot size from 116 millimeters to 140 millimeters, the first sign of normalization. Most of the bones of his toes were damaged due to the burn injury, but his surgeons say that some of the bones can be recovered.

“We will do whatever is necessary to treat him,” Seong said.

Seyha’s journey is far from over. He still has to go through several more rounds of painful surgery to straighten the bones and muscles of his foot and he will need skin grafts over the newly constructed parts.

His right foot will hardly look the same as most, but Seyha will be able to walk and drive a car.

Meanwhile, Seyha’s time in Korea seems to have given him a new dream.

“I want to help others like the people here [in the hospital],” he said. “Do you think I can do that if I become a doctor?”