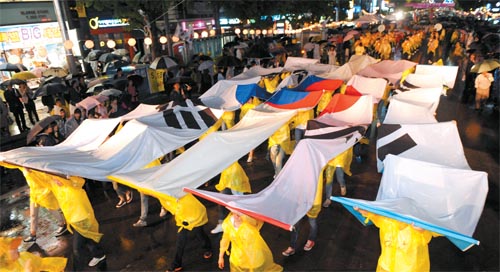 People gather last night in a plaza in Geumnamro, Gwangju, to commemorate the 30th anniversary of the democracy uprising against the Chun Doo Hwan military dictatorship, which was brutally repressed. By Oh Jong-chan


Marking the 30th anniversary of the Gwangju democracy movement, a series of events to honor the May 18 popular uprising against military dictatorship were planned for yesterday and today, but commemorative groups complained that the Lee Myung-bak administration is cold-shouldering the occasion.

An anniversary eve celebration of the May 18 Gwangju democratization movement was held yesterday evening in front of the old South Jeolla provincial government building in Gwangju. About 3,000 people participated in the event, which included a street parade, music and dance performances.

A memorial event hosted by families with loved ones killed during the May 18 uprising also took place this morning at the May 18 National Cemetery in Gwangju. Throughout yesterday, about 70,000 people visited to pay respects to those who died.

The Gwangju democracy movement began on May 18, 1980, when residents staged an uprising against the military regime of Chun Doo Hwan, who seized control of the country by military coup on Dec. 12, 1979, shortly after President Park Chung Hee’s assassination. For nine days, the citizens of Gwangju confronted the military but were ultimately crushed.

During Chun’s regime, the uprising was called a rebellion of communist sympathizers, but the event was later recognized as a democracy movement. Chun, along with his successor Roh Tae-woo, was eventually convicted for their brutal suppression of the Gwangju movement, but later pardoned.

The government will also hold a commemoration at the cemetery today and Prime Minister Chung Un-chan was scheduled to attend along with key government officials, political party leaders and heads of civic groups. The Ministry of Public Administration and Security, however, banned rank-and-file public servants from attending.

President Lee Myung-bak will not attend the anniversary ceremony, prompting complaints from the commemorative groups. The May 18 groups issued a joint statement, urging the president to reconsider his decision.

Blue House spokeswoman Kim Eun-hye said yesterday that Lee won’t be able to attend the ceremony in Gwangju because he is scheduled to have a summit with the visiting Bangladeshi president, dismissing speculation that the president was skipping the event because of political and ideological reasons.

The commemorative groups also expressed displeasure that a popular song, “March for Lovers,” will not be included in the official ceremony. The Ministry of Patriots and Veterans Affairs said the song would be played, but not during the main ceremony, and that it would not change the current program at this point.

The May 18 groups also complained about the Seoul city government’s rejection of its plan to establish a memorial altar on the outdoor plaza in front of City Hall. The city government turned down the plan, saying the organizers had not applied for a permit in advance.

The opposition Democratic Party also criticized the Lee administration’s “cold treatment” of the May 18 anniversary.

“When he was a presidential candidate, President Lee had spoke carelessly about the May 18 democracy movement,” said Democratic Party Chairman Chung Sye-kyun. “For the second year in a row, he is skipping the anniversary ceremony. The May 18 anniversary is designated as a national observation day, but concerns grow that Lee is treating it coldly.”

Chung also complained that rank-and-file civil servants were banned from the event, although it is hosted by the Ministry of Patriots and Veterans Affairs.