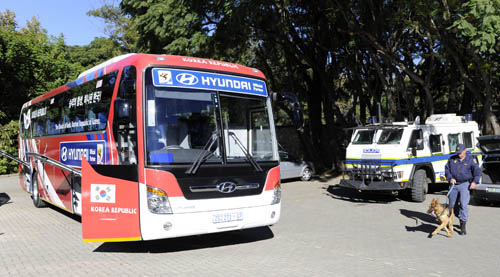 A South African police officer and his dog keep watch at the Hunters Rest Hotel in Rustenburg, where the South Korean football team is staying, yesterday. [YONHAP]

JOHANNESBURG - As the first-ever World Cup on the African continent prepares to kick off on Friday, South Africa’s major cities are bustling with football fans who traveled from across the globe to cheer on their favorite teams.

They’re also bustling with thieves who are targeting tourists, journalists and even the football players themselves.

A major local broadcaster, MBC, said on Sunday that a freelance producer for its weekly global affairs program “W” was mugged in a restroom at a shopping mall in Johannesburg. The unidentified male attacker strangled the producer until he passed out, then stole his money and passport.

The Argentine national team, who will play South Korea on June 17, had their uniforms and other belongings stolen from the University of Pretoria last month. And thieves took 1,900 pounds from the Colombian football team just a day after they arrived for a friendly match against host nation South Africa.

That theft came as a particular shock, because the Colombians were staying at the five-star Southern Sun Hotel in Johannesburg. Two hotel employees have been charged with the crime.

South African police have stepped up their security measures in response. When the South Korean team arrived at the O.R. Tambo International Airport near Johannesburg and moved to their base camp Rustenburg on Saturday, a helicopter and seven police patrol cars escorted them. Three armored cars are stationed outside their base, and 20 police officers are on full alert to guard the players around the clock.

“There’s crime in every country. Lots of shooting deaths occur in the United States,” a South African taxi driver who drove a JoongAng Ilbo journalist said. “I don’t understand why people think crime is rampant when there are more black people.”

According to South African police, there are 50 murders and 494 thefts per day in South Africa. A 1998-2000 survey compiled by the United Nations Office on Drugs and Crime ranked South Africa second for assault and murder per capita, and first for rapes, according to Yonhap.

In a recent press conference with foreign correspondents, South African National Police Commissioner Bheki Cele said he doesn’t expect the media to be its “praise singers,” but he urged them be objective.

“We appeal to you not to exaggerate normal policing, which will continue, and associate each crime committed, or arrest made, with the safety of the World Cup,” Cele said. “Such unfounded allegations have the potential to taint unfairly the image of the tournament when, in fact, some of these crimes are isolated and have no link [to the World Cup].”