Food will bring the Koreas together, defector says

Food will bring the Koreas together, defector says 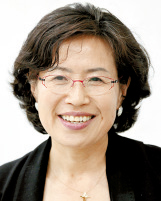 Some believe that the way to a person’s heart is through their stomach. Lee Ae-ran, director of the North Korean Traditional Food and Culture Institute, believes that food has the power to not only unite individuals but also to create bonds across borders.

“When South and North Korea reunify someday, the thing binding people from the South and North will be food,” Lee said. “The first step toward cultural unification could come as North Korean defectors teach South Koreans about their food and vice versa.”

Lee is a North Korean defector herself and she has achieved great success in South Korea. She received her doctorate in food and nutrition from Ewha Womans University last year, becoming the first female defector to earn a doctoral degree. Now, she is a professor in the department of food and nutrition at Kyungin Women’s College. Lee also won the Award for International Women of Courage from the U.S. Department of State.

Despite her success, she and her family have had difficulty in recent months due to the sinking of the South Korean warship Cheonan. She said that her younger brother’s colleagues asked him whether it was okay for South Korea to admit North Korean defectors since it’s known that many defectors are double agents. Even though these comments sting, she says she feels nothing but sadness for the deaths of the sailors.

“When the sinking of the South Korean warship Cheonan occurred, I felt sorry. The nation’s sons died because of North Korea,” Lee said.

Lee thinks that the only way to overcome the prejudice that many defectors face is for them to achieve economic and social success.

“When North Korean defectors show they can be competitive, the people around them will begin to view them in a positive light,” she said.

Lee entered South Korea through the Aplok River, China, and Vietnam with her 4-month-old son in 1997. When she lived in North Korea, she studied food engineering at a college in Sinuiju, and worked as a food quality examiner for 10 years. After coming to South Korea, she took a series of odd jobs, including cleaning hotels and delivering milk, to support the nine members of her family, including her parents and siblings. Later, she worked as an insurance broker, earning the highest record at her company in only two years.

Her life changed when she gave a special lecture at Ewha Womans University, which gave her an opportunity to enter the university’s graduate school as a scholarship student and earn her doctoral degree.

Success stories like Lee’s are rare among the more than 20,000 North Korean defectors in South Korea. According to the Korea Research Institute for Vocational Education and Training, 75.3 percent of North Korean defector families earn less than 1.5 million ($1,214) per month. And many become the victims of insurance fraud.

“One investigation found that most female defectors get information about employment from other defectors, but they don’t often have the right information, so it’s easy for them to get swindled.”

That’s why Lee puts such a strong emphasis on vocational education.

“The best way to support North Korean defectors is to help them become independent,” she said. “Vocational education is an important part of helping defectors stand on their own two feet. Teaching North Korean food is a part of it as well.”