Missed save a black eye for England goalie

Missed save a black eye for England goalie 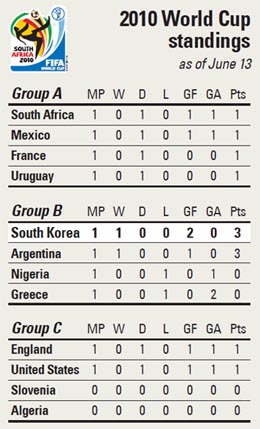 JOHANNESBURG - Robert Green has added his name to the lengthening list of blundering England goalkeepers.

Green let a routine shot from Clint Dempsey slip through his grasp for the Americans’ only goal in their high-profile World Cup opener, a 1-1 draw in Group C.

From David Seaman at the 2002 World Cup and Scott Carson in a Euro 2008 qualifier to several gaffes by David “Calamity” James, England has a growing reputation for producing poor goalkeepers.

Former star keepers such as Gordon Banks, Ray Clemence and Peter Shilton would likely have dealt easily with Dempsey’s low, left-footed drive in the 40th minute at Rustenburg on Saturday.

Green was well-positioned as he went down to stop the ball, but it slipped off his gloves and rolled into the net to make it 1-1. The AFP reported that the horrendous mistake prompted two newspapers, the News of the World and the Sunday Mirror, to run the same headline over Green’s photo: “Hand of Clod.”

“I think it’s one of them freak things,” said England captain Steven Gerrard, who scored his team’s fourth-minute goal. “I think he’ll make some important saves for us. We’re all behind him.”

England coach Fabio Capello said he hasn’t decided whether to start Green for the second game against Algeria in Cape Town on Friday.

“He made a mistake, but in the second half he made a good save,” Capello said. “We have time to decide, to speak with him. Afterwards, I will decide.”

England supporters are used to epic errors from their goalkeepers. Seaman allowed a long-range free kick from Ronaldinho to float over his head for Brazil’s winning goal at the 2002 World Cup. James let a long-range drive by Austria’s Andreas Ivanschitz squirm under his body for a 2-2 draw in World Cup qualifying in 2004. Niko Kranjcar’s shot at Wembley bounced past Carson to virtually end England’s chances in the Euro 2008 qualifier.