Principal’s e-mail pays off for his students

Principal’s e-mail pays off for his students 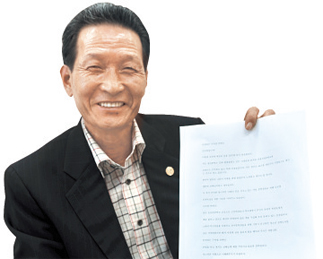 Principal Seo Jeong-pyo shows a copy of the e-mail he sent to his old schoolmate Koo Ja-young, the CEO of SK Energy, and the reply he received from the company’s Social Contribution Department. [YONHAP]

When Seo Jeong-pyo, the principal of Seosaeng Middle School, located in a remote part of the southeastern coast city of Ulsan, wrote an e-mail to his former schoolmate asking for a donation to help the school, he didn’t know what to expect. His former schoolmate, Koo Ja-young, is now the CEO of SK Energy, and he and Seo had never met. But Seo’s desire to give his 223 students a better education through new books paid off in the end.

“I hope to help my students become global leaders and provide them with the opportunity to read many books. But our school is very small and located in the countryside so it is hard to get outside funding, even for books,” Seo wrote, adding the request that Koo help his students, “who try to study hard despite being in circumstances that are less than fortunate.”

Seo and Koo both graduated from Jang-an Middle School in Busan.

“After I found out that Koo was in the class two years ahead of mine in middle school, I decided to ask for his help,” Seo said. “However, I was worried that I might cause him some inconvenience. After all, he is the CEO of a world-renowned corporation.”

Seo said he thought about the e-mail for more than two weeks but finally sent it, thinking that it wouldn’t hurt to try.

He got a reply on June 10, just two days after he sent the message.

“We were deeply touched by your hard work and effort for your students. We would be very happy to be of help,” the e-mail from SK Energy’s Social Contribution Department read.

The company has committed to donating 30 million won ($24,210) for books to the school.

After news of the contribution spread, Gori Nuclear Power Plant, which is located close to Seo and Koo’s old middle school, offered to donate 5 million won to the school. Gori had also donated 70 million won last April to support the school’s extra-curricular programs.

This was not the first time Seo has raised funds for the school. After he came to the school as the vice principal in 2003, he secured 2.2 billion won from Gori for a new dormitory.

“After I moved to the middle school in the urban area, I just couldn’t stop thinking about these students,” Seo said. “Many of the students at Seosaeng are from single-parent families or are living with their grandparents, but despite the hardships they face they still haven’t given up their dreams.”