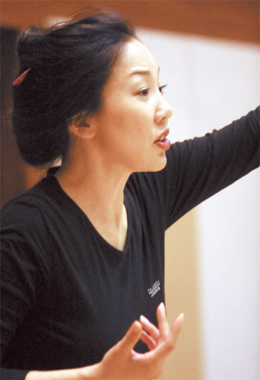 When Lee So-young, general director of the Korea National Opera, went to a meeting of opera company directors from all over the world this month in Beijing, China, she expected to find herself seated behind the 20 other directors who had been invited.

After all, Korea is considered one of the most advanced Asian countries when it comes to Western-style opera, but it still lags behind Western countries such as Italy, France and Germany.

On the first day of the meeting, she was seated in the back, just as she had expected. The day after her presentation on the KNO, however, she was surprised to find that she had been moved up to a seat right next to the director of the Deutsche Oper Berlin.

“It was not important for us to brag about our production history or the size of our theater, which was a task we could not have done,” Lee said. “I made a presentation on the projects I started working on as soon as I got on board with the Korea National Opera. We produce 11 operas a year, and two of the 11 are new creations.”

Later, she was equally shocked when the director of the Bastille Opera in Paris approached her and wanted to talk about developing new projects together.

Her belief in the power of opera to create connections between people is strong.

“Opera is the most beautiful way for human beings to communicate. It is all done with just the body and the voice. That is why it is so inspiring and why it can change one’s perspective on life, including the staff, singers and the audience. But an opera’s meaning should be constantly studied and reanalyzed according to the time period we live in,” said Lee.

Her mother, Hwang Young-geum, was a leading opera singer, and Lee followed in her footsteps. She majored in voice in college, but later she discovered that she wanted to study something else.

“As I stood on stage singing, I saw the people behind the scenes, and I thought they were the people who really ran the show,” she said.

As a result, she decided to study directing, which was virtually unheard of then.

“There still isn’t any subject or department called ‘opera directing’ in college as far as I know,” Lee said.

After she came back to Korea, she started working as an assistant opera director, even though, with her training and family background, she could have had her pick of jobs.

“I was waiting for someone to ask me why I was working as an assistant director, when I had the potential and talent to direct my own production,” said Lee.

In 2008, she became the first female director of the Korea National Opera, and changed the face of the genre in Korea.

“I believed things would happen to me when I was ready,” Lee said, as she recalled the time in 2005 when she was asked to direct “Faust” for the opening of Seongnam Arts Center in Bundang.

She had resolved not to direct the production for 20 years after seeing a production of the opera by her favorite director Giorgio Strehler in Europe.

“He was a charismatic director. That’s why I ran out of the theater and cried in my car for two hours after the performance.

“Then I started thinking about the kind of director I wanted to be. I decided that I wouldn’t do Faust for 20 years because I knew that I could never forget what I felt and that if I were to direct the show within 20 years I would have no choice but to imitate his directing skills,” Lee said.

“I got the offer to direct Faust exactly 20 years after that.”

She says she has worked hard to increase the public’s appreciation of opera.

“Appreciating opera is not about memorizing the composer’s name and the year the opera was made,” she said. “It is about interaction among singers and audience, interaction between the voice and the ear. That will be the way to change the landscape of opera in Korea.”

Still, she says, Korea needs a national opera house, “a place that we can call home.”

The company’s current production, a new opera called “Arang,” will be performed today at 7 p.m. and on Sunday at 3 and 7 p.m. at the Myeong-dong Art Center in central Seoul.