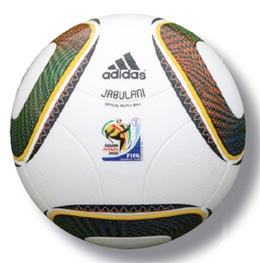 PARIS - When it comes to the World Cup Jabulani football, perfect may not be good enough, according to scientists who have analyzed the controversial ball.

Experts puzzling over its allegedly erratic flight - which has unnerved more than one goalkeeper in South Africa - have concluded that the Jabulani may simply be too round to fly straight. Since being chosen for the World Cup, the Adidas-made ball has come in for a serious drubbing.

Spain’s Iker Casillas has dissed it as “rotten,” while Italy’s top goalkeeper Gianluigi Buffon tagged it as “unpredictable.” Julio Cesar of Brazil suggested he could do better buying a ball in a supermarket.

Part of the problem may be that “the stitches of the Jabulani are internal, so the ball resembles a perfect sphere,” said Eric Berton, deputy director of the Institute of the Science of Movement in Marseille, France.

In other sports - tennis, golf or baseball - the balls have irregularities precisely to ensure a more stable and controlled trajectory. The ridges or exposed seams are what make possible spin in tennis or a curveball pitch in baseball.

Despite the Jabulani’s so-called “grip ’n’ groove” texturing, however, the ball apparently doesn’t behave in the same way.

“Because of the shape, the time of contact with the foot is reduced,” Berton told AFP. “As a consequence, it practically doesn’t spin. The ball travels a little less far, and will have a floating and unpredictable trajectory, whether for a striker or a goalkeeper.”

Wind-tunnel tests conducted by Kazuya Seo and Takeshi Asai of Yamagata University in Tsukuba also found that the machine-made Jabulani was close to a perfect sphere, and has a tendency to slow suddenly in mid-flight - a disconcerting characteristic for footballers.

Australian scientist Derek Leinweber at the University of Adelaide concluded after computer tests that the ball is faster and more unpredictable than its predecessors.

“That means the goalkeeper can no longer really anticipate its trajectory,” he said.

The Jabulani - “to celebrate” in isiZulu - “allows for maximum control, stable flight and perfect grip under all conditions,” FIFA said in unveiling the controversial ball.

The ball is constructed of eight thermally-bonded polyurethane panels, and is very nearly waterproof. Adidas has defended it.

“There are strict FIFA guidelines on the ball,” commented the German company. “Not only does our ball fulfill all these conditions but in fact they go beyond them.”