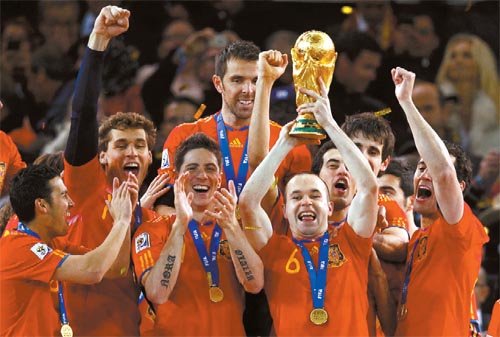 Spain’s Andres Iniesta holds the World Cup trophy after the 2010 final match between the Netherlands and Spain at Soccer City Stadium in Johannesburg on July 11. [REUTERS/YONHAP]


JOHANNESBURG - Spain won the World Cup for the first time when it beat Netherlands 1-0 thanks to a super strike by tireless midfielder Andres Iniesta four minutes from the end of extra time at Soccer City on Sunday.

With penalties looming for the second successive final Iniesta fired home the winner when he was put through in the area by Cesc Fabregas. Keeper Maarten Stekelenburg dove to his right and got a hand on the ball but could not keep it out. The defeat was heartbreaking for the Dutch, who were down to 10 men after John Heitinga was sent off in extra time. It was their third World Cup final loss after 1974 and 1978.

Spain, appearing in its first final, become the second team after West Germany in 1974 to follow up winning the European championship by lifting the biggest prize of all. The Spaniards were also the first European team to win the World Cup on a foreign continent as they became the eighth name on the trophy first played for in 1930.

“It was a very difficult match,” said Spain coach Vicente del Bosque. “We have fantastic players. We could have scored another goal or two but I think the result was deserved. It’s a very happy day for me. Naturally, I’m proud.”

“It’s unbelievable, incredible,” added goal scorer Andres Iniesta. “It cost a lot of energy. To win a World Cup is an indescribable feeling. This was our work that we started a long time ago, it was hard work, but we’re savoring this now.”

Nobody in Spain will care, but it was a ragged final, marred by a record 13 yellow cards and one red. After the goal and again at the final whistle the furious Dutch players surrounded English referee Howard Webb, claiming Iniesta was offside and also angry that Cares Puyol had escaped punishment when hauling down Arjen Robben late in normal time. Despite the frenetic finish, there was little action in the first 90 minutes.

Stekelenburg was forced into a save after five minutes when Sergio Ramos headed a Xavi cross goalwards while Spain forward David Villa crashed a volley into the side netting with the goal looming.

But a series of freekicks and bookings, including two strong challenges by Dutch midfielders Nigel de Jong and Mark van Bommel, shook the Spanish out of rhythm and stopped them from producing the swift-passing game that got them to the final.

Netherlands offered little in attack and the nearest it came to a first-half goal was a bizarre incident when Gregory van der Wiel attempted to give the ball back in an act of sportsmanship. The fullback’s 60-meter punt bounced up and over Spain captain Iker Casillas, forcing the startled keeper to leap and tip it to safety.

Wesley Sneijder then split the Spanish defense with a perfectly-weighted ball into the path of Robben after 62 minutes only for Casillas to save brilliantly with his feet. Villa had a shot blocked in front of the line, an unmarked Ramos headed wildly over the bar from five meters out and Puyol had his escape when Robben stayed on his feet as he was being pulled - and was booked for complaining.

In extra time it was Stekelenburg’s turn to save with his feet when substitute Fabregas was sent clear by Iniesta. Netherlands had to play with 10 men for the last 10 minutes of extra time when Heitinga was sent off for hauling down Iniesta on the edge of the box.

The little midfielder got back on his feet and soon after was celebrating scoring the winner in the World Cup final after smashing the ball past Stekelenburg from eight meters.