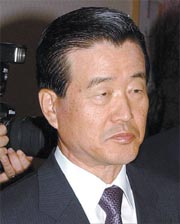 A financial watchdog promised to belatedly investigate Ra Eung-chan, chairman of Shinhan Financial Group, on a charge of violating the real-name financial transaction act in an expansion of the so-called Yeongpo-gate scandal surrounding presidential allies.

“After consulting with the Financial Services Commission, we will request documents from the relevant public institutions,” said Cho Young-jae, head of the commercial bank service department.

In 2007, Ra was accused of allegedly wiring 5 billion won ($4.2 million) to Park Yeon-cha, former chairman of Busan-based shoemaker Taekwang Industrial and a longtime patron of the late President Roh Moo-hyun. An investigation by prosecutors was called off after Roh’s suicide in May 2009.

Park Jie-won, floor leader for the opposition Democratic Party, said last Friday that Ra was being protected by someone close to the president.

“The transfer violated the real-name financial transaction system,” he said, “but the FSS has taken no action against it. It is because he is under the protection of a high-level figure in the Yeongpo Club.”

The Yeongpo Club is an organization of public servants from the Yeongil and Pohang areas of North Gyeongsang established in 1980. (Yeongpo is an abbreviation combining the names Yeongil and Pohang.) The president is from Pohang. The opposition says the group has abused the power of the state to go after the president’s critics. In this case, they’re accusing the group of shielding someone from investigation.

In response to such suspicions, Cho from the FSS said yesterday, “The reason that we couldn’t take any actions was because we had no information regarding the matter.” He also explained that detailed information such as the a bank account holder’s name, transaction period and other legal evidence must be obtained to request a particular bank branch to provide details on financial transactions.

Meanwhile, the prosecution yesterday summoned two officials from the Prime Minister’s Office suspected of abusing power in the first Yeongpo scandal involving an illegal investigation of a businessman.

The Seoul Central District Prosecutors’ Office said it questioned the officials about the surveillance of businessman Kim Jong-ik in 2008 by public ethics officers at the Prime Minister’s Office.

Kim claimed the investigation ruined both his reputation and career.

Lee In-kyu, a Yeongpo Club member, is suspected of reporting the surveillance results to Lee Young-ho, the presidential secretary for employment and labor affairs, who is another Yeongpo member. Lee Young-ho resigned from his post Sunday.

The opposition Democratic Party claimed yesterday there are scores of other illegal surveillances on civilians done by the Prime Minister’s Office.

“[President Lee] should be wiser than trying to end the scandal with the resignation of Lee Young-ho,” said Park Jie-won, DP floor leader. “We urge him to cut out the whole part responsible for the abuse of power.”

“I am stepping down so that I will no longer be a burden to the president,” Jung said in a press release.