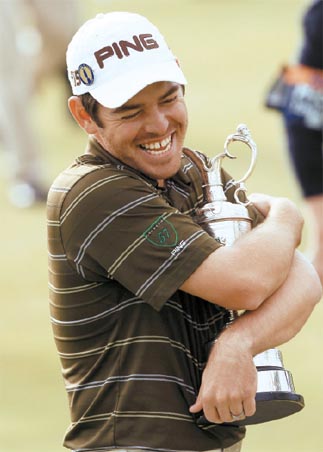 ST. ANDREWS, Scotland - An outrageous 200 to 1 long shot he might have been, but looking back, all the signs were there this week that Louis Oosthuizen would play the best golf of his life and win the British Open.

This year, after all, is shaping up to be a highlight reel for South Africa, with the country’s successful hosting of football’s World Cup. And Sunday, the final day of the tournament, fell on Nelson Mandela’s 92nd birthday.

Oosthuizen - a happy-go-lucky 27-year-old who bears the nickname “Shrek,” as his friends believe he resembles the swamp-loving movie ogre - had not been aware of the Mandela celebrations until just before he set off for the course.

“I woke up this morning and I didn’t know it was his birthday today, but I saw it this morning on the news on the Internet,” he said. “It felt a bit special out there. And you know, when I walked down 18, I was thinking about his birthday. What he’s done for our country is unbelievable, so happy birthday to him once again.”

Oosthuizen, whose one and only top-level tour win came at the lowly Andalucia Open in March, carried a four-stroke lead into the final round.

He held firm to finally win by a whopping seven strokes. He was the fourth player from his country to win the world’s oldest and most prestigious tournament after Bobby Locke, Gary Player and Ernie Els. Though he knows little of Locke, who died in 1987, the two others have been bending his ear.

Els - who has been instrumental in nurturing young South African talent like Oosthuizen through his foundation - called him on Saturday to give him some advice. It seemed to work, and the “Big Easy” was beside himself with pleasure at his protege’s win.

“I thought long before anybody had heard of him that he was going to be an exceptional player,” Els said. “He has shot an absolutely stunning 57 at Mossel Bay (his home course), which will neither be equalled nor bettered. You have something special when you do that.”

On Sunday morning, Oosthuizen heard from Player, who won three Open titles in three different decades from the 1950s.

“We had a little chat. It was nice. He spoke in my home language, Afrikaans,” Oosthuizen said. “He first spoke to my wife, and then he was saying just to stay calm out there, have a lot of fun, and he said that the crowd was probably going to be on Paul’s (Casey) side.

“But then he told me the story when he played against Arnold Palmer when he won his first Masters. He said, ‘They wanted to throw stuff at me.’ But he was so focused on beating him in Augusta.

Oosthuizen says he has drawn inspiration from recent successes in the majors by South African players. Apart from Els, who won several Open titles, Retief Goosen won two US Opens in 2001 and 2004 and Trevor Immelman won the 2008 Masters.

“I think at the moment we’ve got one of the best junior and amateur setups there is. We’ve got a very good basis around that,” Oosthuizen said. “Also the weather in South Africa is brilliant. It’s just becoming a really good sport. In the winter, you can still play some days in shorts.”

Given the way he is playing, it may be some time before Oosthuizen gets the chance to do that, as his northern hemisphere summers will be taken up with preparing for and playing in the four majors.