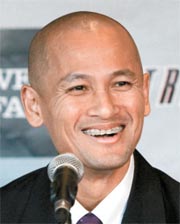 PORTLAND, Ore. - New Trail Blazers general manager Rich Cho says that while he’s impressed with Portland’s youth and depth, the team is still lacking the piece that will bring the city another championship.

Cho, who spent nine seasons as an assistant general manager with the Oklahoma City Thunder, was introduced as the Blazers’ GM on Monday. He replaces Kevin Pritchard, who helped usher the team out of the “Jail Blazers” era several years ago but was ultimately dismissed last month.

Cho, a Northwest native, said that under his watch the Blazers will be “process-oriented and methodical in our approach.”

“Character, teamwork and accountability will be three of our core values,” he said.

The Blazers also considered former Cleveland Cavaliers GM Danny Ferry and former Miami Heat GM Randy Pfund before settling on Cho, 44, who joined the Thunder as an intern when the franchise was based in Seattle.

Cho interviewed with Blazers owner Paul Allen, the billionaire co-founder of Microsoft, last week in Helsinki, Finland. Allen, still traveling in Europe, said in a statement: “Rich has depth of character, a foundation in business and legal matters and a knowledge of the game of NBA basketball that will help our team get even better. He is part of the new generation of NBA executives.”

With a law degree and a background in engineering, Cho has gained a reputation for his expertise with the salary cap and the collective bargaining agreement. He’s also got scouting experience.

“Everyone I spoke to about Rich commented not just on his qualifications but on who he is as a person,” Blazers president Larry Miller said in a statement. “He is well known for his ability to connect genuinely with people. Rich will be a great fit for our organization and for Portland. He is an executive on the rise and we’re thrilled to have him as a Trail Blazer.”

Terms of the contract with Cho were not disclosed.

Pritchard, who had been with the Blazers since 2004, was fired by Allen just hours before the NBA draft. It was never made clear what exactly precipitated the dismissal.

Pritchard built a promising young team around guard Brandon Roy, who was chosen as the league’s rookie of the year before becoming a three-time All-Star. Pritchard was also a staunch supporter of 7-foot center Greg Oden, the top pick in the 2007 draft who has been plagued by injuries.

During Pritchard’s tenure the Blazers also returned to the playoffs after a five-year absence, but they were unable to get past the first round for the past two seasons.

Portland, which won the NBA championship in 1977, went 50-32 last season even though the team was dogged by injuries to several players. During his time in Seattle, Cho worked closely with Microsoft to develop a comprehensive player evaluation system. A member of the Washington State Bar, he also served as a vice president for the SuperSonics from 2005-07.