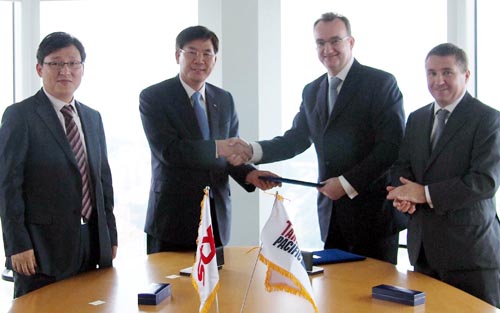 
The shipping unit of STX Group is making major headway in the international market, generating $2.83 billion in revenue through the sale of 42 ships in the first half of 2010.

This year it has received orders from Densa for four large bulk ships including an option to build two more. STX Offshore & Shipbuilding has been able to capitalize on a larger trend in which companies are increasingly interested in Kamsarmax bulk ships. On this end, the STX unit has introduced an optimal Kamsarmax bulk ship it developed wholly by itself. During the first half of the year alone, the company received orders for five of these next-generation ships.

The company’s orders so far this year encompass a variety of ships, showing its ability to cater to different parts of the industry. In April, it succeeded in winning a bid for two 24,000-ton special purpose vessels, while in June it signed a contract with Singapore-based Tanker Pacific Management for six 74,500-ton oil ships including an option for two more.

Meanwhile, STX Europe has once again started bidding on the cruise ship business as the economy recovers. In March, it signed a letter of intent with MSC Cruise - a company jointly set up by Italy and Switzerland - to build a 140,000-ton cruise ship, ranking as a coup for STX Europe. STX has continued to build on its momentum in the second half, inking another deal this month to build a large cruise ship. Under that deal, STX Europe will construct a 139,400-ton ship for Libya’s national shipping company.

The European unit plans to aggressively pursue more cruise ship orders in the second half of the year, viewing it as a potential cash cow as the economy and travel industry recover. STX has also gained traction in the area of high value-added ships. Its Estaileiro Promar S.A. unit recently received an order from Brazil’s Transpetro for eight LPG ships worth $536 million. It plans to construct the ships in coming years and begin delivering them in the third quarter of 2013.