[In-depth interview] Is there a doctor in the grave?

[In-depth interview] Is there a doctor in the grave? 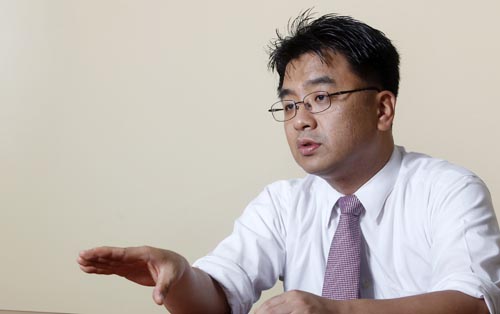 The history of diseases can tell us a lot about political, social and cultural trends. This particular area of study is called paleopathology, which is still in its infancy in Korea. One pioneer in the field is Shin Dong-hoon, a professor at Seoul National University’s College of Medicine.

He is working closely with experts in the fields of medicine, history and archaeology to determine what kinds of diseases once affected Koreans in the past, and what that means for the present population.


Q. First, tell us what paleopathology is and what prompted you to get involved in this relatively unknown field in Korea?

A. Paleopathology is a study of the patterns of diseases that were prevalent in the ancient or medieval population. And there are two ways to conduct such a study. The first way is through historical documents, and the second one is through medical science, using either human or animal remains found at archeological sites during excavations. The latter is what my team does.

Paleopathology is a well-established field in other countries like those in the West where there are hundreds of researchers studying ancient DNA from around the world. There have also been some notable achievements, although many of them are still open to debate.

I think the origin of paleopathology can be traced back to the Egyptian expedition of Napoleon Bonaparte. He came back to France with many relics, and researchers studied the social and cultural implications of those relics. Of course, it differed a lot from what paleopathology is today, because it only involved anthropologists and not medical scientists like me.

As you said, paleopathology doesn’t ring a bell with most Koreans as it remains a relatively young area of research in Korea and there are just a handful of researchers - perhaps about 10 - in the field. The origin of Korean paleopathology can also be traced back to physical anthropology studies in the 1960s and 1970s, which were established in medical colleges back then.

I got interested in this area because there were some cases that made worldwide headlines in the 1980s and 1990s, like the studies of Tutankhamun that received worldwide press coverage. I have always been interested in history.

Isn’t it challenging for researchers from the liberal arts and medical science to work together? Also, how viable is this field in Korea?

It is challenging because the work in paleopathology involves people from various fields - like historians and archaeologists who are well-versed in ancient cloths and burials as well as medical scientists like us.

People who have delved deeply into certain fields may get caught up in them. However, it’s necessary to keep an eye on each others’ work - at least the basics and background.

Also, there are different interests, so it’s important to find common ground and clarify limits before embarking on the project. I think Koreans are not really good at “making deals,” and that’s why conflicts occur.

As for the viability of the field in Korea, I think Korea has all the skills and techniques required, but it may lack experience. Researchers in other countries often study bones, but that’s not the case in Korea. The soil is so good here that ancient bones decay easily. Researchers in Korea have mummies to study instead.

Korean mummies were naturally mummified, unlike say Egyptian mummies that were artificially mummified. So Korean mummies are found with complete sets of internal organs, which is a rare opportunity for people studying paleopathology. However, a well-preserved mummy doesn’t necessarily mean there’s much DNA left. A not-so-well-preserved mummy can often give you more to work with, and result in unexpected revelations.

What are some recent achievements in paleopathology?
Can you give us some examples?

As I said, many of the findings in paleopathology are still being debated. There is a theory that tuberculosis wasn’t found on the American continents until Christopher Columbus discovered them and Europeans began to settle there. There are similar theories about rheumatism and syphilis.

In our studies the biggest achievement so far has been the discovery of a parasite called Gymnophalloides seoi.

In 1993 researchers at our university identified the parasite known as Gymnophalloides seoi in a patient with pancreatitis, and we believed then that it was the first instance of the parasite. But years later, we found the same parasite in fecal samples from a 17th-century female mummy dug up in 2006 in Hadong, South Gyeongsang, which proved the existence of the parasite long before we expected.

Also, the discovery revealed that the people in Hadong consumed oysters in the 17th century, as oysters are the only known carrier of the parasite. Hadong doesn’t produce oysters today, but a 1530 historical document saying that oysters were one of Hadong’s delicacies supported the theory.

To give us a better picture, tell us about your latest project. And what’s your ultimate goal?

A mummy arrived in our lab yesterday. We suspect he may have had tuberculosis. We also have observed possible signs of arteriosclerosis. The mummy apparently doesn’t have descendants who want to claim the body, so we don’t have a deadline to complete our study. In cases like this, we often work for about a year on one mummy. Of course we can finish our work faster, but we don’t want to rush things and miss important clues.

There are limitations to how much and how long our study can go with mummies whose identity is certain and who have descendents. But such is the case in other countries as well. For instance, in North America there are very strict regulations regarding studies of Native American mummies.

Then the mummy is transferred to our lab, and we try to extract DNA by taking samples of soft tissues on the site where they are found. We also take samples of fecal matter, which is often found within the intestines.

I hope to create some sort of a Joseon Dynasty human remains collection, which would be a database for all human samples collected from Korean mummies.