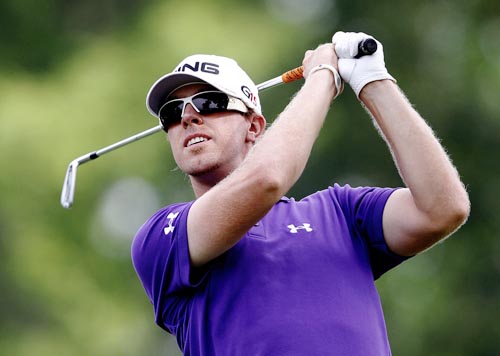 AKRON, Ohio - American Hunter Mahan, ice-cool when it mattered the most, held his nerve over the closing stretch to win the biggest title of his career by two shots at the WGC-Bridgestone Invitational on Sunday.

While world number one Tiger Woods and second-ranked Phil Mickelson returned scores they would prefer to forget, Mahan fired a six-under-par 64 to seal his first victory in an elite World Golf Championships event and his third on the PGA Tour.

“I feel great,” Mahan said greenside after booking his place on the U.S. team for the Oct. 1-3 Ryder Cup. “This feels unbelievable.”

Three strokes off the pace going into the final round, the 28-year-old Mahan charged into contention with a sizzling front nine of five-under 30 and made two clutch putts to save par over the last four holes to post a 12-under total of 268.

Woods, a seven-time winner here, produced his worst finish on the U.S. circuit after closing with a 77 while Mickelson squandered a golden opportunity to replace his fellow American as world number one.

Left-hander Mickelson would have reached the top of the rankings for the first time by finishing alone in fourth place or better.

Having begun the final round tied for 10th, he tumbled into a share of 46th at three over after battling to a 78 that featured a double-bogey at the ninth where he three-putted from four feet.

“It’s hard to be upbeat after a round like today,” said Mickelson. “I’ve got some work to do to get my own game sharp.”

Woods, who ended his round almost three hours before the overnight leaders teed off, produced his highest final score as a professional to share 78th place in the 80-player field.

At one of his favorite venues, he carded two double-bogeys in the last five holes to post an 18-over total of 298, 30 strokes behind Mahan.

It was his highest 72-hole aggregate on the PGA Tour, his worst relative to par and the first time since the 2003 PGA Championship he had strung together four rounds over par.

“(I’m) just not playing well,” a grim-faced Woods said after totaling 33 putts. “The only thing I can say all week is I was patient, and unfortunately that’s not enough.”