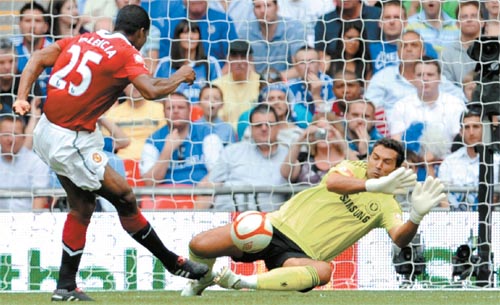 While United looked clinical in the traditional curtain raiser to the season, a lethargic Chelsea side was consigned to its fourth straight preseason loss on its return to Wembley - where it won the FA Cup title in May - and only managed a late consolation goal from Salomon Kalou.

United lost both league encounters with Chelsea last season after being beaten in the Community Shield.

Encouragingly for United’s prospects of preventing another season of Chelsea domination, Hernandez - the speedy Mexican signed from Chivas Guadalajara - looked lively when he came on at halftime, even though his 76th-minute goal was anything but graceful.

The striker stumbled as he met Antonio Valencia’s cross, kicking the ball onto his own face before it drifted into the net for United’s second, coming either side of goals from Valencia and Dimitar Berbatov.

“It’s unbelievable to score and win this match - it’s an unusual goal,” the 22-year-old Hernandez said.

United manager Alex Ferguson said he thinks the signing of Hernandez for 7 million pounds ($11 million) will turn out to be a bargain.

“He is certainly different to what we’ve got,” Ferguson said. “He was so quick to get there (for the goal), his speed took him past the ball, he’ll take that all the time.”

By the time Hernandez came on to make his competitive debut, United was leading 1-0.

Valencia scored four minutes before the break after racing onto Wayne Rooney’s precise, low cross. Rooney displayed quick thinking on the right flank under pressure from John Terry after meeting a lofted crossfield ball from the 35-year-old Paul Scholes, who controlled the midfield and showed watching England coach Fabio Capello what he was missing at the World Cup.

“This time last season, he’s saying to himself, ‘This is my last season,’” Ferguson said. “It came across my mind also, simply because he’s had a lot of injuries in his career. He keeps coming back - it’s not easy to do that. It’s a phenomenon.”

After Hernandez had given United a two-goal cushion, Kalou pulled one back in the 83rd, meeting the rebound after Edwin van der Sar parried Daniel Sturridge’s shot.

But Dimitar Berbatov rounded off the win in stoppage time by lobbing Chelsea goalkeeper Henrique Hilario - a deft goal Ferguson hopes will help to end the “harsh criticism” of the club’s record signing.

“It was important for Dimitar to score, he’s been under a lot of pressure,” defender Nemanja Vidic added. “But I think he’ll score more this season.”

It is the third time in four years United has won the Community Shield. Last August, United was beaten in the same game by Chelsea, which went on to end the Manchester side’s three-year grip on the Premier League trophy.

United, whose league campaign opens against Newcastle on Aug. 16, was limited to winning the League Cup last season, but resisted a major overhaul of the squad. The only players to join the team were Hernandez and 20-year-old defender Chris Smalling from Fulham, although Ferguson was boosted Sunday by the return of striker Michael Owen, whose hamstring injury has prevented him from playing in a competitive match since the League Cup final in February.

Like Ferguson, Chelsea manager Carlo Ancelotti resisted making many changes to his squad and didn’t deploy new recruit Yossi Benayoun until the 73rd, although the midfielder helped to inspire a brief fightback.

Chelsea was thwarted several times by goalkeeper Edwin van der Sar, who may be entering his final season, but is no less agile at 39. The Dutchman did well to turn Branislav Ivanovic’s header clear in the first half and dive to block Sturridge’s shot from a tight angle in the 70th.

Ancelotti said there needs to be a big improvement before Chelsea hosts West Bromwich Albion in the season opener on Saturday.

“It’s not been a good preseason, we have lost four games,” the Italian said. “We played too slow in the first half - it was not our best day but this is normal, it can happen at the start of the season. It’s impossible for some players to be fit and quick after 10 days of preseason. Players who came back from their (post-World Cup) holidays on July 26 need to improve their condition.”