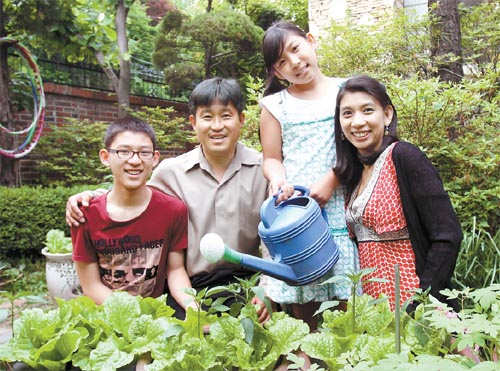 
Jasmine Ba, 33, an activist, TV personality and icon for multicultural families here, suffered a tragedy Sunday when her husband Lee Dong-ho died of a heart attack while rescuing his daughter from a mountain stream.

The entire extended family was on a three-day trip to enjoy the mountain scenery in Okcheon-dong, Gangwon. Lee and Ba were buying fishing gear when Lee saw their daughter Seung-yeon flailing in a deep section of a stream. Lee dove in, reportedly pushing his daughter onto an inner tube before being swept away. It was later revealed that he had suffered a heart attack. A bystander pulled Seung-yeon to safety.

Ba first met Lee in 1994 as a student at Ateneo de Manila University near Davao on the island of Mindanao, where she was the lead singer in a school band. Known for her looks, Ba ranked third in the preliminaries for Miss Philippines. Lee was a sailor who happened upon the store that Jasmine’s parents owned in Davao. They said it was love at first sight. Although Ba had to drop out of college when she became pregnant with her son, Seung-geun, at the age of 19, she said she has few regrets about leaving home in 1995 to live with her husband here.

Since moving to Korea, she has worked to bring attention to the problems of immigrant women by appearing on television programs such as KBS’s “Love in Asia” and EBS’s “Korean for Foreigners.” She came close to being nominated as a candidate for the Seoul Metropolitan Council by the Grand National Party during the June regional elections.

Lee’s body was taken to Severance Hospital in Seoul. Ba cried uncontrollably upon seeing her husband’s body, while Seung-geun tried to hold back tears and spoke of how he regretted talking back to his father. “I don’t know why I did that,” the boy said. “It’s driving me crazy.”

Through Ba’s career as an actress, politician and professional translator for documentaries, Lee was always by her side. Lee had said he felt sorry for his wife who came to a foreign land at a young age. Although he joked about her busy schedule, he said, “Letting her do what she wants is the best I can do.”