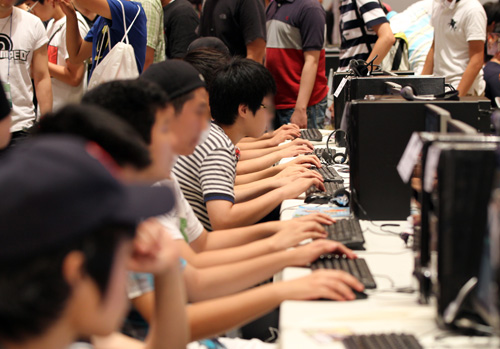 
E-Stars Seoul, one of world’s largest game and online sports festivals, kicked off yesterday at the COEX convention center in Samseong-dong, southern Seoul.

More than 60 leading professional gamers from countries including Germany, Sweden, Poland, Russia, China and Japan will attend along with 350 gamers from Korea. The three-day annual festival is the fourth of its kind.

One of the major events is the Asia Championship, an e-sports tournament that tests gamers’ skill at Neowiz Games’ “Crossfire,” a first-person shooter, and Windysoft’s “Get Amped Hardcore,” a fighting game. Competitors will have a shot at pools of 15 million won ($12,700) for each game.

The festival’s Continental Cup is also popular among global participants. Its official games are both American: “Half-Life: Counter-Strike” from Valve and “WarCraft III: The Frozen Throne” by Blizzard.

A separate E-Stars summit will be held today with discussions of the overall e-sports market, especially the changes brought on by the global financial crisis and standards for establishing game rules. Participants will include Jen Hilgers, chief executive of Turtle Entertainment; Vincent Cheung, head of PGL; and Jean Marie, CEO of Game Solution.

E-Stars Seoul was initially introduced to develop Seoul’s game industry and create a digital technology-related festival to represent the capital.