More patients being sent to Korea

More patients being sent to Korea 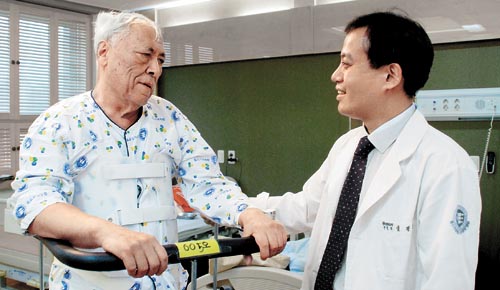 
The number of foreign patients receiving treatment in Korea is increasing, as medical skills in this country are being recognized worldwide.

Zharmukhambetov Yerlan, an orthopedic surgeon at President Medical Center in Almaty, Kazakhstan, recommended that Chaimardan have surgery in Korea, because the operation required technology that wasn’t available in Kazakhstan.

The procedure involved delicate surgery, which required removing a disc without touching other organs.

Yerlan spent time last fall at Leon Wiltse hospital to become familiar with its procedures and has since referred two to three patients to the hospital each month. Most of the patients are high-ranking officials, including generals and intelligence officers.

“I came because Yerlan knew [a lot] about Korean medical skills and recommended surgery here,” Chaimardan said, “I am satisfied with the results of the operation.”

Shim Jung-hyun, a Korean spine specialist, said, “Kazakhstani doctors who have learned medical techniques in [places like] Germany and Israel, [were] surprised to conclude, after receiving training in Korea, that Korea is an ‘America in Asia.’”

There are an increasing number of doctors trained in Korea referring patients with complicated circumstances to Korean hospitals. It has almost evolved into a patient “medical tour.”

The most popular site for these so-called “medical tourists” is plastic surgery hospitals. From 2007 to last June, 959 doctors who were trained at the DongYang Plastic Surgery Clinic sent 250 patients from China, the United States, Japan and New Zealand to the hospital. Some surgeons have even sent colleagues as patients.

Some patients are sent to Korea because their local hospitals are unable to treat them. The parents of Peter, a 4-month-old baby from Kyrgyzstan, went to Vladimir Yegay, a Kazakhstani cardiologist, to ask for “knifeless” heart surgery. Yegay, who was reluctant to carry out the procedure, recommended Sejong Hospital in Bucheon, where he had a training session last July.

The surgery was a success.

Patients have also been sent from developed countries. Dr. Issam Mardini, an orthopedist from the United Arab Emirates, sent a 42-year-old American woman living in Dubai to undergo a spinal operation at Wooridul Spine Hospital. And Martin Knight, a British doctor, sent a colleague to Korea.

From 2008 to 2010, 92 doctors from China and Uzbekistan were invited to Korea. Both the government and university hospitals are inviting foreign doctors for training as part of an investment in Korea’s medical profession.

Asan Medical Center in Seoul has trained 640 foreign doctors from 31 different countries and is currently building a dormitory to provide housing for them.

“An increasing number of foreign trainees will soon lead in [treating] foreign patients,” said Kang Seok-kyu, a deputy head of the medical center.

Yonsei University’s Severance Hospital and Samsung Medical Center in Seoul have worked with 95 and 23 foreign doctors, respectively. Most of the trainees pay their own costs.

Some Koreans are calling for efforts to enhance the brand image of “Medical Korea.”

Jung Ki-taig, a health services management professor from Kyung Hee University, said, “Regulations prohibiting hospitals from [outside] investment must be lifted to increase the number of foreign medical trainees and [open] the way for hospitals to expand [here and abroad].”