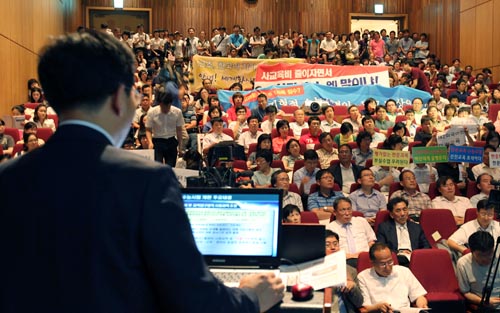 A group of academics commissioned by the Education Ministry present their proposals to reform the state-run college entrance exam yesterday while education professors and students hold up signs in protest. [Yonhap]


If a group of education experts have their way, the College Scholastic Ability Test, suneung in Korean, is about to get easier. And students who think they blew it will get a chance to be retested two weeks later.

Critics have long argued that the CSAT is a major source of stress for students.

Top universities rely heavily on CSAT scores in choosing students, and that pressure is part of what drives students to go to cram schools at great expense to their parents, heating up the private education market.

To address the problems, a group of education professors and researchers from the Korean Council for University Education and other education institutes yesterday unveiled a plan to revise the CSAT.

The Education Ministry will review their suggestions and will announce a final revision by the end of October.

The experts made two main proposals. First, when a student registers for the test, he or she can choose to take it once - the only option now - or to retake it after 15 days.

Secondly, the experts recommend that students be allowed to choose a CSAT as rigorous as the current one, or a CSAT-lite, which only has questions based on material learned in the classroom or from textbooks.

The harder test would be labeled “B,” and the easier one “A.” The math test has already been offered in A and B versions. The education experts recommended expanding that system to the Korean and English language tests as well.

Another suggestion called for the Education Ministry to get rid of two CSAT subjects altogether - the second foreign language test and the Chinese character test - as most universities don’t take them into consideration.

“The change is a positive sign for students, as they will be given one more chances to take the CSAT in case they make mistakes,” said a director of a Gangnam-based private cram school. “But I doubt the change will cut down private education expenses as the majority of students instinctively want to get a good score on the CSAT, and they will turn to cram schools.”

“I don’t think my child’s burden will go away with the change,” said Shim Mi-hyang, a mother of a third-year middle school girl. “She might have one more chance to take the test, but she won’t feel at ease just because of that,” the mother said.

Shin Gyeong-cheol, father of a third-year middle school son, complained, “The changes are too difficult to understand even for parents who have a good understanding of the CSAT. The ministry needs to make the test simple.”