Korean, Japanese attitudes about each other growing closer: survey

Korean, Japanese attitudes about each other growing closer: survey 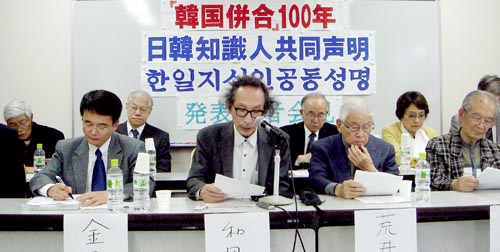 Japanese intellectuals issue a statement in May denouncing Japan’s annexation of Korea at a press conference in Tokyo.


Koreans and Japanese still showed a divide in their views of the two countries’ troubled pasts. But according to a joint survey by the JoongAng Ilbo and the Nikkei, the disparity was significantly lower than in the past.

The survey was arranged for the 100th anniversary of the signing of the annexation treaty, which started Japan's 35-year-long colonial rule of Korea.

The poll surveyed 658 Koreans and 515 Japanese via telephone between July 30 and Aug. 1, before an apology for colonial rule was issued by Japanese Prime Minister Naoto Kan and accepted by President Lee Myung-bak earlier this month.

Asked about the impact of the annexation, 78.9 percent of the surveyed Koreans said it was bad and 16.3 percent said it had both negative and positive aspects. No one answered that annexation was good.

But only 20 percent of Japanese said it was bad with the other 60 percent saying there were both good and bad outcomes. (Percentages don't always add up to 100 because not all respondents answered all questions.)

The two nations’ people also sharply differed on their view of apologies made by Japan for the colonial period. Japanese officials and prime ministers have made numerous apologies of various degrees through the decades.

More than four in five Koreans (82.4 percent) said Japan had not apologized or not done so sufficiently. Fifteen percent of Japanese said an apology to Korea had not been made. 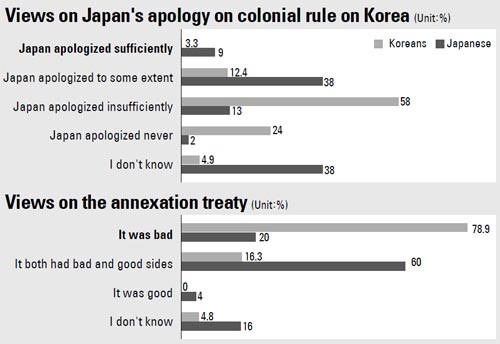 As a way of deepening mutual understanding, 58 percent of Koreans welcomed the idea of a visit by Japanese Emperor Akihito to Korea within one or two years, with the rate surging to 65 percent for respondents in their teens and 20s. Forty-eight percent of Japanese were positive about the idea. In Korea, 34.6 percent said the idea of joint publication of history textbooks - which Koreans believe will teach young Japanese about the aggression committed in the past - was the most urgent way of having a future-oriented relationship with Japan. Other respondents (21.7 percent) said cultural understanding was more important, and 17.4 percent said strengthening economic ties was paramount.

Around two-thirds of respondents from both countries agreed on the necessity of having a Korea-Japan free-trade agreement.