These billiard sisters are more than just beautiful

These billiard sisters are more than just beautiful 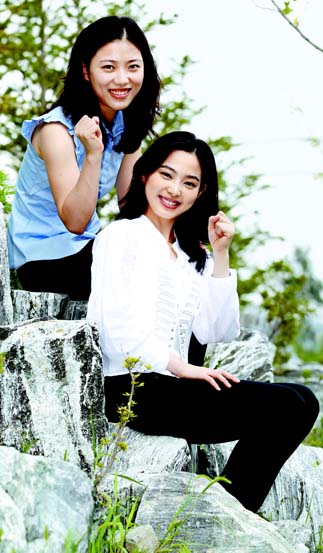 Cha Bo-ram (left) and Cha Yu-ram (right) are gunning for gold medals at the Asian Games in November. [JoongAnd Ilbo]

After careers filled with ups and downs, sisters Cha Bo-ram and Cha Yu-ram are out to prove to the world they are more than just beautiful billiards players.

They are shooting for gold medals at the Guangzhou Asian Games in November.

The sisters say they are better players now that they play with a clear mind, something they said they had lacked in past competitions.

Bo-ram, 25, is playing snooker again after having suffered some setbacks. And Yu-ram, 23, has displayed great confidence after winning her first world pool championship this year. Both of their careers in billiards go back to 1999.

They watched billiards on television many times before and liked the idea that they could play indoors. They had a long spell in tennis, but the girls said it was not for them.

“After playing 10 hours of tennis each day in the scorching sun, we still had lots of energy left over to play billiards indoors,” Yu-ram said.

“My sister and I could even play billiards for six hours without sitting down,” she added.

In 2000, the sisters moved from Wando, South Jeolla to Seoul to attend a billiard academy.

At around this time, Bo-ram fell into a slump. Her achievements were lower than those of her sister. As an extremely active person, she was also frustrated with the limited movements of billiards.

It was mostly because of this that she retired in 2004.

Her big break came in September 2006.

Yu-ram played against world billiards star Jeanette Lee (39, United States), where she instantly became famous. It was then that she earned the nickname “Beautiful Billiard Girl.” But happiness did not last.

She felt burdened by the public appearances, which limited her practice time.

After taking five years off to refresh herself, Bo-ram returned to the billiards table in 2009.

“I feel that now I can finally play to enjoy,” she said.

During her absence, she learned badminton, hapkido, golf and other sports.

Another factor in Bo-ram’s successful comeback, she said, was her sister’s return to the pool table.

The sisters seem to feed off each other’s success. They also said they give each other plenty of support.

If Yu-ram gets shaken emotionally, for example, Bo-ram reminds her to be positive. With such help, Yu-ram beat her arch rival Kim Ga-young this March and won the Amway WPA Women’s World 9-Ball Open in Taiwan.

It was the first world championship that Yu-ram has won and it was especially momentous for her because she was able to prove that there is more to her than her “Beautiful Billiard Girl” nickname.

Meanwhile, Bo-ram changed her specialty from pool to snooker.

“Yu-ram can succeed in pool and I think that I can do well in snooker,” she said.

The sisters are now working together to win the Asian Games gold medal.