Pining for mushrooms that are costing way less

Pining for mushrooms that are costing way less 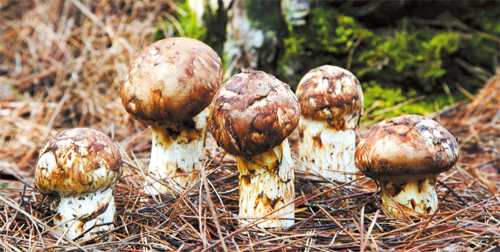 YEONGDEOK, North Gyeongsang - The now-abated cabbage crisis caused Koreans to cry out in despair over soaring prices for the main ingredient in kimchi, a staple in Korean meals. Now others are crying out in joy over a productive pine-mushroom harvest, which has led to dramatically lower prices for the usually costly product.

This town in North Gyeongsang Province is known for its abundance of snow crabs. But this year, the region is seeing pine mushrooms bring in unprecedented profits to locals.

The Yeongdeok Forestry Cooperative has sold 102.6 tons of pine mushrooms as of Tuesday last week, a five-fold increase compared to a year ago. That’s 33 percent of the total 312 tons sold in 20 cities and counties in the Gyeongsang provinces and Gangwon Province.

“This is the largest sale [of pine mushrooms] since the co-op was established in the 1970s,” said Kim Hyeon-pil, executive director of the cooperative. “If we take into account those who privately sold pine mushrooms via the Internet or in person, total sales in this region could reach 300 tons.”

Sales so far this year amount to 20 billion won ($18 million), including 8.3 billion won from sales through the co-op.

Low prices are drawing many shoppers to the co-op - an average of 500 people a day. Some even waited at the co-op for up to two hours to purchase pine mushrooms.

Last week, when all the cooperative’s 10,000 ice boxes - which the mushrooms are stored and shipped in - ran out, plastic bags had to be used instead. And co-op workers had to stay past midnight to deal with thousands of orders each day.

Locals have literally been living in the mountains to collect pine mushrooms and make big money. A 69-year-old resident here set up a makeshift shelter halfway up a mountainside and has been living there since the Chuseok holiday. Ten other family members, including his two sons and brother-in-law, came from other cities to lend a hand.

But not all people searching for pine mushrooms experienced success. An 80-year-old woman got lost in the mountains earlier this month and a search party of 60 policemen and rescue workers was dispatched to find her. She was recently rescued.

This year’s weather conditions - with pouring rain in August and relatively low temperatures in September - were optimal for pine-mushroom cultivation.

“[We saw] the domino effect occurring in terms of increasing income and rejuvenating the local economy,” said Kim Byung-mok, governor of Yeongdeok County. “The government’s pine-mushroom improvement project, in which we invest 2 billion won every year, also seemed to play a role in increased production.”