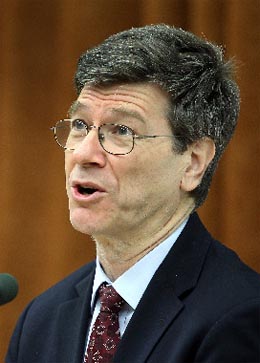 Renowned economist and Columbia University professor Jeffrey D. Sachs claims that the United States and Europe are still in a crisis, while the rest of the world, particularly Asia, has shown a strong economic recovery. This shift from West to East, he said, is the first in modern history.

The professor made his remarks in a speech at Seoul National University on Monday. In his speech, Sachs stated his belief that globalization, especially China’s rise as a major economic power, together with internal political changes in the United States, are the two main factors that brought about the global financial crisis.

“Globalization, in my view, makes the technological revolution that started in the richer countries, spread to the whole world,” he said, adding that the better you are, the faster you catch up.

“Korea is probably the number one or two example, together with China, of this successful convergent economic growth,” he said.

The Korean model came about in the early 1960s, and was followed by Taiwan and Singapore in the late 1960s, he said. But in Sachs’ view, the global economy first changed in 1978, when China adopted a similar growth model. Considering that China’s population of 1.3 billion people represents over 21 percent of the global population, it has a significant effect on the global economy, he said.

India, with a population of 1.2 billion, adopted the model in 1991. That means that between China and India, about 40 percent of the world’s population adopted the Korean model, he said.

Sachs insisted that the world is integrated in the market economy, which was the starting point for the economic crisis in the U.S.

According to Sachs, the other factor was that while the gap was narrowing between developed countries and developing countries due to globalization, the U.S. was facing competition unlike that which it had seen before. In other words, investments that were previously made in the U.S. are now made in developing countries such as China or India.

“In order for the rich countries to be successful in a world of globalization, they have to face the competition effectively,” he said. “The U.S. economy has certain strengths, but it also has certain weaknesses. When globalization came, those weaknesses were not addressed. And they became more and more serious over time.”