Number of defectors pushes past 20,000

Number of defectors pushes past 20,000 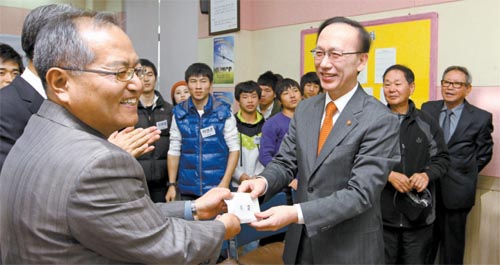 Unification Minister Hyun In-taek, right, gives a pep talk to Woo Ki-sup, principal of Yeomyung School, which is exclusively for North Korean defectors. The minister visited the school with the first, 1,000th and 10,000th defectors. [YONHAP]


Since the first defector made the decision to leave North Korea for a new life in 1949, thousands of North Koreans have made the daunting trip to South Korea, often risking their lives in the process. The path is full of obstacles, with North Korean guards and Chinese border police ready to send them back to the North upon capture. Some are sold into a life of prostitution in China and never make it to South Korea (a majority of defectors are women) and some are never heard from again.

But now the number of North Korean defectors in South Korea has surpassed 20,000, according to data released yesterday by the Ministry of Unification, and is only expected to increase in the years to come.

With the 20,000th defector - a 41-year-old woman from Yanggang Province surnamed Kim who entered the country on Nov. 11 - the South Korean government is now re-evaluating its existing programs and policies to ensure defectors have a better chance to adjust to their new life. 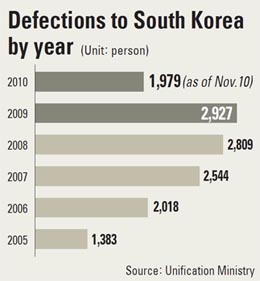 The total number of North Korean defectors was more than 1,000 in 1997. By 2007 it hit 10,000 and finally surpassed the 20,000 mark this month with Kim, who told South Korean authorities she left the impoverished North after suffering from a difficult life. Kim successfully escaped North Korea with her two sons after her mother, who fled to South Korea last year, encouraged her to leave with her family.

With North Koreans increasingly abandoning their lives in the midst of a third-generation power succession in their country, the South Korean government, too, is bracing itself to adjust to the growing influx of North Koreans here.

“We are planning to continue our efforts to enable North Korean defectors to establish stable lives and we are also in the middle of constructing a new support system for the defectors,” said the Unification Ministry in the report released yesterday.

“The government and the South Korean people will become one to help the 20,000 defectors who have come into our lives,” Unification Minister Hyun In-taek told students yesterday during a visit to mark the milestone at Yeomyung School. The school, located in Seoul, was established for defectors in 2004.

Accompanying the minister on his visit was Kim Sang-mo, the first North Korean to defect in 1949. Defectors are given numbers to help identify them after they go through a screening process in South Korea. In addition to Kim, defectors with the numbers 1,000 and 10,0000 were also with the minister yesterday.

During the visit, Lee Seung-ju, 26, a student at the school, discussed the differences he felt between North and South Korea after arriving from North Hamgyong in 2008.

“The difference feels higher than the wall at the [military] demarcation line,” Lee said.

Lee isn’t the only one who feels like an outsider. After they arrive, the defectors must stay for three months at Hanawon, a state-run resettlement facility. But even that happens after undergoing screening tests by the government and National Intelligence Service to ensure they are not operatives sent from the North. The Hanawon center helps the defectors adjust to life in South Korea and teaches them everything from taking the bus, using credit cards and, for women, putting on makeup.

Upon exiting the center, the defectors are given 6 million won ($5,298) for personal expenses, 12 million won for housing and an additional monthly stipend of 420,000 won. The ministry also established a new foundation on Sept. 27 to provide defectors with added financial support.

Despite the assistance, North Koreans quickly become pariahs in South Korean society. They tend to group together in certain Seoul districts, such as Yangcheon, Gangseo and Nowon, and often find it hard to adjust to life in the South, according to information provided by the Unification Ministry.

The Unification Ministry has also been under fire for failing to help the defectors adapt to their new environment, as some of the defectors have applied to emigrate to a third country after living for a time in South Korea. According to information from the Unification Ministry, 13 percent of North Korean defectors are currently unemployed and 54 percent rely on government welfare, a stark difference from the 3.2 percent of South Koreans who are on welfare.

To help the defectors who are here and those who are to arrive in the days to come, the South Korean government plans to supplement services to help them adjust while encouraging South Koreans to welcome them.

“[The ministry] has developed services to help defectors find jobs and is encouraging South Korean citizens to become more aware of the defectors’ plight,” the ministry said.

Although he is aware of the differences and difficulties ahead, Lee, the Yeomyung student, said he has hope that he will succeed in South Korean society because here he has a chance at an education, something he said he had little of back in the North.