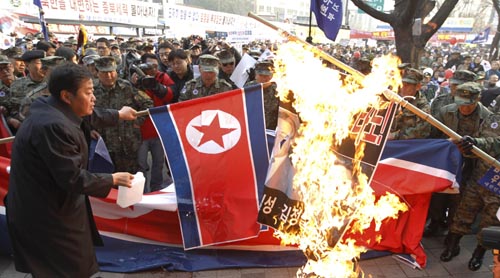 
Anti-North Korea sentiment is mounting in South Korea, with thousands of demonstrators holding a rally yesterday to protest against the North’s attack of Yeonpyeong Island last Tuesday.

About 30,000 demonstrators held a rally in front of the Donghwa Duty Free Shop in central Seoul. The Association of Patriotic Organizations in Korea said the rally was held to call for “the toppling North Korean leader Kim Jong-il’s dictatorial regime.”

The association also said: “The [government’s] poor response to the Cheonan’s sinking led to the shelling on Yeonpyeong Island. If we are afraid of war, we can’t avoid and win a war in the future.”

Some South Koreans also expressed anger over China’s lukewarm comments in the wake of the attack on Yeonpyeong Island, especially China’s remarks that six-party talks should resume.

“The Chinese government should stop being a sponsor for the North and play a responsible role for peace and stability on the Korean Peninsula,” the Korea Freedom Federation said during a press conference in front of the Chinese Embassy in Seoul yesterday.

“China is passive on the North Koreans’ side [regarding the attacks], threatening peace in the South and violating the armistice agreement [of 1953],” the federation said.

Condemnation of the North was also seen on social networking Web sites yesterday, with many users saying they were disappointed by China’s position.

“When I heard that China would make an important statement, I assumed that it would officially criticize the North Korea’s attack, but the only thing it said was to suggest six-party talks,” said Lee Yeong-suk, a netizen. “We should not accept the resumption of talks.”

And on Daum’ Agora, one of the nation’s biggest online debate spots, one post listed with the title of “China’s announcement .?.?. quite disappointing,” was the most recommended post on Sunday.

“China should have [issued] remarks to show its willingness to persuade the North to apologize for the attack,” said Hwang Yong-cheol, the writer of the post. “By suggesting the multilateral talks, China just seemed to want to avoid pressure from the international community, which expects it to take more responsibility.”

Lim Hyeong-wu, an Internet user, posted a writing on Nate, “Unless North Korea makes an official apology for the attack and promises to give up a second assault, the talk itself has no meaning.”

A series of emotional reactions were also posted. One user with the ID “acroiris” said on Twitter: “China’s response is like pouring oil into burning house.” Others, though, appealed for talks with North Korea. “I think sitting at the table and having a talk with the North would be the best idea,” said one Twitter user with the ID “2HRyu.”

Lee Jung-hee, a Democratic Party lawmaker, posted on Twitter yesterday: “We stand at a crossroads between war and peace.”